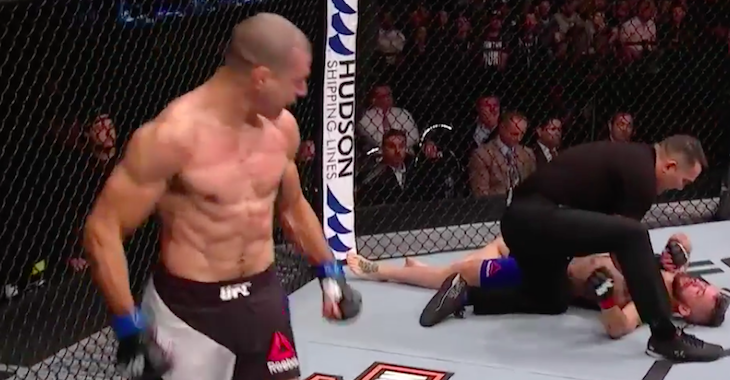 On Saturday night, the UFC returned to our screens with UFC Auckland, which broadcast live from Auckland, New Zealand.

This exciting event’s undercard was wrapped up by a lightweight bout between American Ultimate Fighter veteran Vinc Pichel and Australia’s Damien Brown. This one did not last long.

Mid-way through the first round, Pichel caught his advancing foe with a thunderous uppercut to the chin. The impact of this punch sent Brown careening to the supine position on the canvas, where Pichel finished him off with a meteor shower of followup ground strikes.

With this win, Pichel makes a triumphant return to the cage after more than three years on the shelf. The American is now on a three-fight win-streak, as he defeated Garett Whiteley and Anthony Njokuani in his next most recent bouts. He’s 10-1 in sum.

Brown, meanwhile, has a two-fight streak derailed by this loss. He’s now 17-10 overall.

What did you think of Vinc Pichel’s epic knockout win on the UFC Auckland undercard?