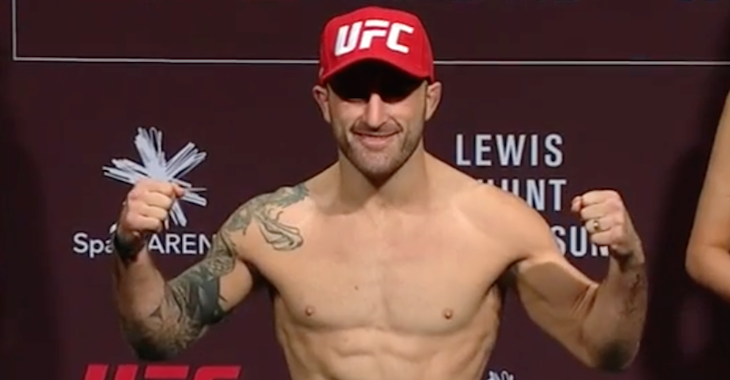 On Saturday night, the UFC returned to our screens with UFC Auckland, an exciting, 11-fight card.

The event’s main card was kicked off by a featherweight bout by Japanese veteran Mizuto Hirota and highly regarded Australian prospect Alexander Volkanovski.

This one was all Volkanovski. Though the durability of Hirota’s chin was on full display, he could simply not keep up with his talented Australian foe, who landed big shots for the duration of the fight. By the time the third and final round had ended, Volkanovski had out-landed his Japanese adversary by a whopping 105-46 margin. He emphasized this massive striking disparity by succeeding on three of four attempted takedowns and amassing more than 5 minutes of control time. Needless to say, he’d done more than enough to sway the cage-side judges, and walked away with a sound unanimous decision win.

See some of the highlights below:

With this win, Volkanovski moves to a fantastic 15-1 overall, and 2-0 on the sport’s biggest stage. Hirota, meanwhile, returns to the loss column after an impressive win over Cole Miller. He’s now 18-8-2 in sum.

Did Alexander Volkanovski prove he’s the next big thing for Australian MMA at UFC Auckland?