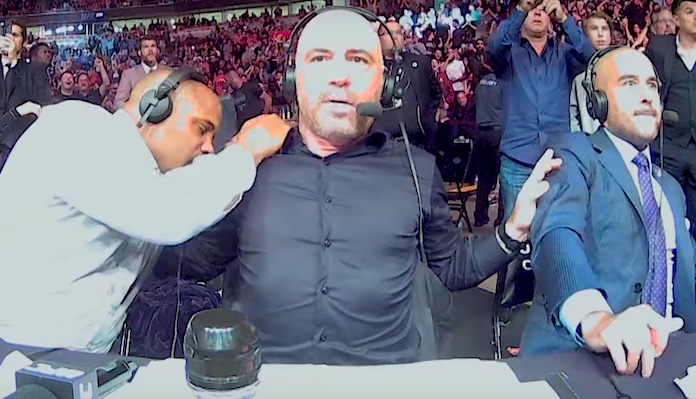 Featherweight prospect Herbert Burns took on veteran Evan Dunham in the first bout of the evening at Saturday’s UFC 250 event in Las Vegas.

The result was a quick first round submission from the Brazilian Jiu-Jitsu specialist. Burns (10-2 MMA) was able to take Dunham (18-8 MMA) to the canvas in the early moments of round one and promptly proceeded to lock in a fight-ending rear-naked choke.

The victory improved Burns to 2-0 under the UFC banner, with his previous win coming over Nate Landwehr by way of first round knockout.

While Burns sustained little damage at the hands of his opponent on Saturday night, he did not fair well against the Octagon cage.

After submitting Evan Dunham, Herbert Burns was seen limping around the cage.

Then in the post-fight interview Burns confirmed to Rogan that he had in fact suffered an injury against the cage.

“My foot is really bleeding,” Herbert Burns explained. “I think when I tried to push him against the cage, my left foot went through the cage and caused a huge cut. I’m bleeding, but I’ll be fine.”

It turns out Burns was not at exaggerating about the severity of the wound.

Check out the nasty photos of the injury below courtesy of @UFCDoctor on Twitter:

UFC Safety Tip: The Rule is dont insert anything in the fence. Why cuz it will tear ur stuff. This rarely happens tho #UFC250 pic.twitter.com/ll8jzsH5J2

“UFC Safety Tip: The rule is don’t insert anything in the fence. Why? Because it will tear your stuff. This rarely happens though. UFC 250.”

The good news is Herbert Burns will be just fine and should be cleared for a return to action very soon.

Who would you like to ‘The Blaze’ fight in his next Octagon appearance? Share your thoughts in the comments section PENN Nation!