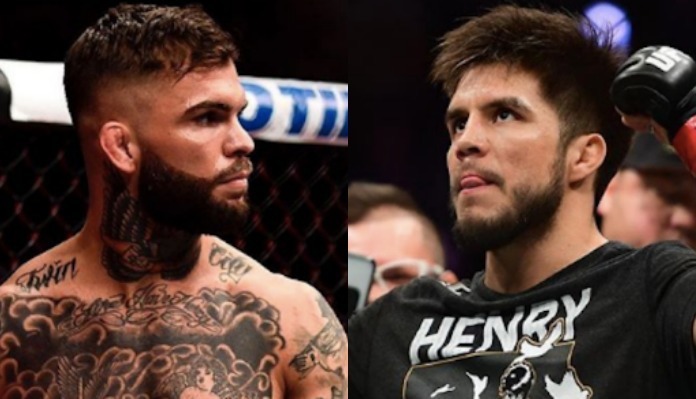 “No Love” Garbrandt claimed the 135-pound crown when he defeated Dominick Cruz by unanimous decision in 2016. His reign was short-lived as he lost to TJ Dillashaw in his first title defence by TKO a year later.

Since then, Cejudo has claimed the bantamweight belt for himself. His next opponent was scheduled to be the UFC legend and former featherweight champion Jose Aldo. The pair were expected to collide at UFC 250 next month, but due to the impact of the coronavirus pandemic, Aldo was forced to withdraw from the fight.

That’s when Dominick Cruz stepped in. The former 135-pound champ has been out of action since 2016 due to a series of injuries. However, Cruz announced he is back on top form and ready to take on the division’s new king.

Dear @HenryCejudo,
The real king has already been told that we’re fighting May 9th. I’ll see you there.
P.S. -Bring your other tiny lil friend @cptdasamericas so I can slap you both around. 👋 👋
-Signed, Sealed, Delivered-

Cody Garbrandt appeared outraged by the matchup and Dominick Cruz’ apparent queue-jump. In a Twitter post, Garbrandt showed a conversation with Cejudo’s manager Ali Abdelaziz where it appeared that No Love was eager to get a matchup in the works. See it below:

Triple C stands For Triple Coward you chose a guy who hasn’t fought in over 4 years @HenryCejudo 🤡🤡 come on @ufc !! • side note Rafael I’ll see you before the summer is up… pic.twitter.com/gyAAG9IRxn

The former champion slammed Cejudo for picking an opponent who has been out of action for almost three years. On a side note, Garbrandt appeared to confirm his own matchup against number five ranked bantamweight, Raphael Assuncao. It is unclear when this alleged matchup will take place.

Do you think the 28-year old is right to call Henry Cejudo a coward? Would you prefer to see Triple C take on Dominick Cruz, Jose Aldo or Cody Garbrandt in his next title defence?