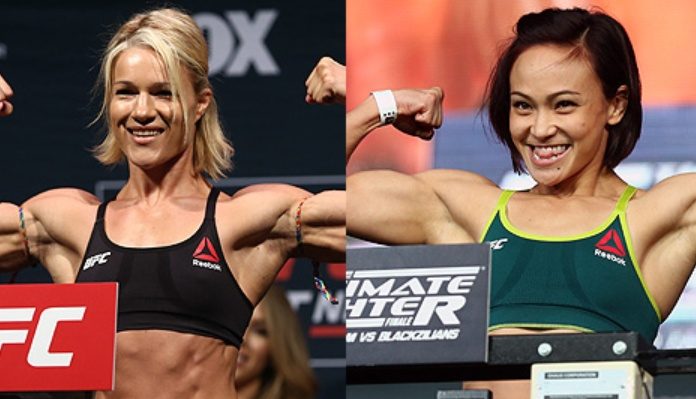 The day after UFC 229 gets another fun fight in Ovince Saint Preux vs Dominick Reyes, we just get another! This time at strawweight.

As the big Khabib Nurmagomedov vs Conor McGregor headlined card continues to take shape, the name value is stacking up.

The ReviewJournal has reported that the addition of a top 10 strawweight matchup is headed to Las Vegas on October 6th as the No. 7 ranked “Karate Hottie” Michelle Waterson takes on No. 8 ranked Felice Herrig.

Sitting side by side in the rankings, there’s nothing odd about this matchmaking.

For both fighters, this will be their first fights since April where they fought a week apart. The former Invicta FC atomweight champion Waterson took on and defeated Cortney Casey her last time out by way of split decision. The win snapped a two-fight losing streak.

Herrig’s last victory also came against Casey via split decision at UFC 218 in December. At UFC 223 she fought in a fantastic back and forth war with top contender Karolina Kowalkiewicz but this time was on the receiving end of the split decision loss.

Having gone 3-2 in the UFC to this point with those losses coming to Tecia Torres and the current champion Rose Namajunas, Waterson will look to put together another winning streak like the one that she started her UFC career with.

Herrig’s loss to Kowalkiewicz snapped her long four-fight winning streak that had seen her looking better than ever. Now looking to rebound, we’re sure to get a fun scrap out of both ladies.

The rest of the highly anticipated UFC 229 card looks like this (minus the main event):