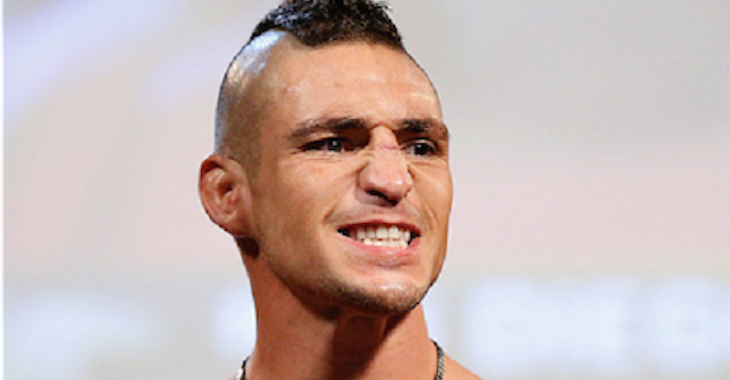 During yesterday’s ceremonial UFC 228 weigh-ins, Craig White surprised Sanchez and all of the fans watching when he proceeded to kiss Diego on the nose during their staredown.

Diego Sanchez (27-11 MMA) will enter tonight’s contest with Craig White on the heels of a two-fight losing skid.

“The Nightmare” was most recently seen in action this past November at UFC Fight Night 120 in Norfolk, where he suffered a brutal first-round knockout loss thanks to a violent elbow from Matt Brown.

Diego Sanchez picked up his most recent victory in November of 2016 when he defeated Marcin Held via decision in a lightweight bout.

Prior to the setback, Craig White had put together a four-fight win streak with all four victories coming by way of stoppage (3 submissions and 1 TKO).

Round one begins and Sanchez sprints across the cage. He throws a right hand and then presses White against the cage. Sanchez picks Craig up and slams him down to the canvas. Sanchez with some ground and pound now. White is doing a good job of defending but can’t get back up to his feet. Sanchez postures up and lands a big right hand. Some short elbows now from Sanchez. He moves to side control but White immediately scrambles back to full guard. Another nice elbow now from Sanchez. He is working hard here. Sanchez with a right hand and then another. He passes to side control and begins working some elbows. White with an uppercut from the bottom. Sanchez with some big shots from the top. He is raining down strikes on White who is mercifully saved by the bell.

Round two begins and Sanchez once again comes across quickly but this time White is able to greet him with some strikes. Diego is on the retreat now. White lands a big knee. Diego shoots in and scores another takedown. He needed that. Ground and pound now from Sanchez. He postures up but eats an up-kick for his efforts. Sanchez appears to be ok after eating that big strike. Diego with some elbows now. He presses Craig up against the fence and works in some hammer fists. White scrambles and gets his back off of the cage. Diego continues to work hard from the top. Shots to the body and then back to the head. He passes to side control and lands a hard knee to the body of White. More strikes from Diego. White is in a world of trouble here. Big hammer fists now from Sanchez. The horn sounds to end round two.

Round three begins and Diego says no to a touch of gloves. White comes forward and lands a kick and then a big punch which sends Diego crashing to the canvas. Sanchez pops back up to his feet and dives for a leg. He gets it and proceeds with securing another much needed takedown. Diego with a pair of big elbows from guard. He works in a right hand. White is looking for a triangle choke but Diego is not having it. He postures up and lands a pair of big shots. Sanchez ends up in side control after a scramble and lands a big knee to the shoulder of White. That had to hurt. More knees from Sanchez. Just under two minutes remain in the fight. Diego Sanchez continues to push the pace and lands a plethora of short strikes. White continues to scramble and is able to survive until the final horn.

Dallas is BRINGING IT from the start! #UFC228 pic.twitter.com/GWCckSclmJ