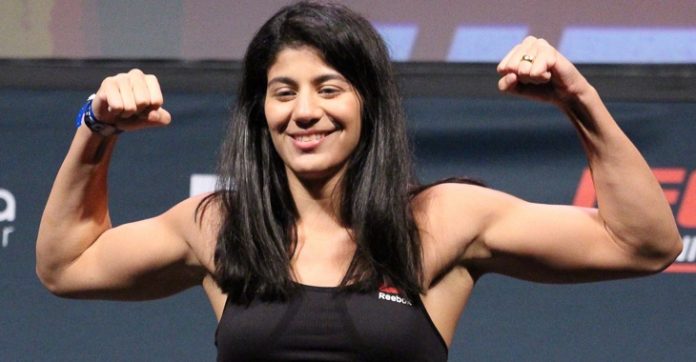 Round one begins and Zingano quickly takes the center of the cage and lands a low kick. Ketlen lands a nice counter right hand over the top. The ladies clinch and Vieira lands an elbow. The break and Cat lands a right hand over the top. She follows that up with a low kick. Ketlen with a nice left hand. Once again the fighters clinch up and Cat lands a pair of hard knees. The ladies break and Vieira lands a combination. She scores with a nice left hand. Zingano fires off a kick to the body that lands. Both women land good shots. Zingano with another good kick to the body. Vieira is utilizing a lot of forward pressure here. She scores with a combination. The fighters clinch and Cat lands a pair of big knees. Ketlen drops down and scores a takedown. Just over one minute remains in the opening round. Vieira is looking to move to mount. Cat won’t let her. Ketlen with a pair of right hands. She moves to half guard and lands a right hand. The horn sounds to end round one.

Round two begins and Cat starts things off with a nice kick to the body of Ketlen. Vieira leaps in and scores an amazing judo-throw takedown. She winds up in full mount. This is not good for Zingano. Cat is able to scramble and get back to full guard. She needed that. Vieira moves to half guard and works in some right hands. Cat is able to scramble and once again get back to full guard. Zingano with some nice elbows from her back. Under one minute remains in the round. Vieira with a left hand and then a nice right. She gets back to half guard. The horn sounds to end round two.

Round three begins and Cat Zingano starts off quickly. She lands a high kick followed by a right hand. Another good right hand from Zingano. Cat checks a kick and appears to hurt her foot. Vieira quickly pounces on Zingano and winds up scoring top position. She begins working from full guard. A couple of good left hands now from Ketlen. Zingano attempts to scramble but Vieira won’t let her. Another left hand from Ketlen. Cat scrambles and this time gets back up to her feet. She immediately lands a pair of good punches on Ketlen. Zingano with a knee to the body. Just over one minute remains in the final round. Both ladies land good knees from the clinch. The referee steps in and forces the fighters to break. Cat with a front kick to the body. She throws a wild combination. Another good kick from Zingano. Vieira presses her back up against the cage. The horn sounds to end the final round.

Zingano comes out throwing heat in round 3!!#UFC222 @CatZingano pic.twitter.com/X84B6z8Sjt