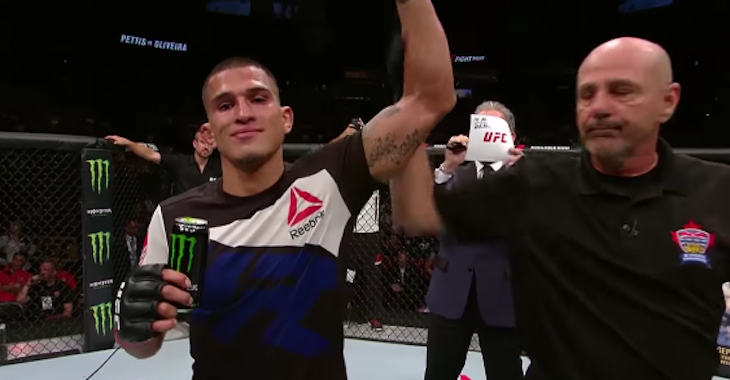 Round one begins and Miller lands a nice inside leg kick to start. Pettis returns fire with a kick to the body. Miller fires right back with another leg kick. Pettis comes forward and throws a flying knee that partially connects. Miller circles out and paws his jab. Anthony catches him with a right hand but Miller lands yet another leg kick in return. Miller with a pair off hard inside low kicks. Pettis circles and fires off a hard kick to the body of Jim. Pettis is looking to cut Miller off who is circling well here. Anthony lands a right hook. Both men score with leg kicks,. Pettis with a huge kick to the body. He follows that up with a knee to the face. Miller is in trouble. Pettis with punches. Miller responds with shots of his own. He circles off. Pettis catches him with a right and then a high to the body. Pettis with a spinning back fist that lands. He is throwing now. Switch kick from Pettis and then he goes low. Miller shoots for a takedown but it is not there. He backs off and lands a low kick. He goes to the body with a jab. Pettis with a high kick and the horn sounds to end round one.

They're exchanging early!!@ShowtimePettis tagging Miller early in round 1! #UFC213 pic.twitter.com/jmgo35Up3d

Round two begins and Miller starts off quickly with a combination. Pettis responds with a body kick and then another. He lands one high. Miller shoots in and lands a takedown. Miller is bleeding badly here. Pettis is trying to lock up a triangle choke. Miller escapes and postures up for strikes. Pettis scrambles but Miller takes his back. He instantly begins working for a rear-naked choke. Pettis rolls and somehow winds up in top position. He moves to half guard and begins landing some hard elbows. He switches to right hands. Pettis jumps over a leg and transitions to side control. He looks to setup an arm lock. Miller scrambles but gives up his back. Pettis looks for a choke but it is not there. Miller stands up and Pettis drags him back down as the horn sounds to end round two.

Round three begins and Pettis fires off a pair of low kicks that land. Miller presses forward and lands two low kicks of his own. Both fighters connect with left hands. Miller charges in with a combination that partially lands. He scores with another low kick. Pettis responds with one to the body of Jim. Both fighters are pawing with the jab. Miller continues to chop away at the lead leg of Pettis. Anthony goes upstairs with a front kick that lands. Miller takes it but backs off. Pettis comes in with a low kick but eats a counter right hand. Miller with a low kick and then another. Pettis fires back with one of his own. He leaps in with a right that partially connects on Jim. Miller shoots in for a takedown but Pettis is able to fight it off. Anthony pushes Jim agains the fence and works some knees. Both men are trading knees in the clinch. Pettis with a cartwheel kick. Miller tosses one of his own. Anthony responds with a low kick and then a jab. Pettis with another jab and then leaps in with a high kick.

SHOWTIME MILLER IS THE SHOWTIME WE NEED #UFC213 pic.twitter.com/5pAychrRwk