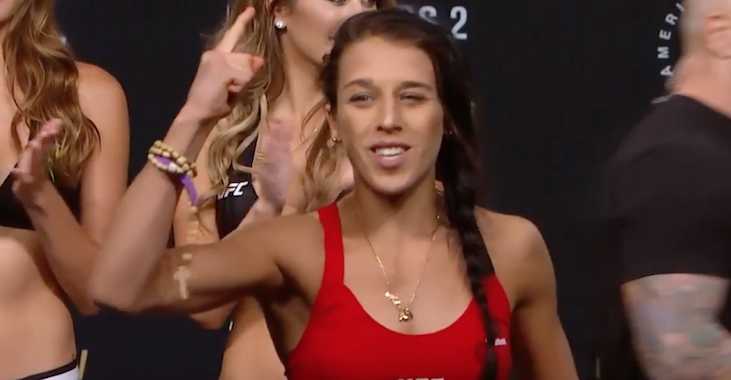 Last night, dominant UFC strawweight queen Joanna Jedrzejczyk made a whopping fifth defense of her throne, defeating a game Jessica Andrade by unanimous decision. Though Andrade had her moments in the fight, and certainly impressed fans with her toughness, it was an impressive win for the champion, who stands out as one of the most dominant fighters in mixed martial arts today.

Here’s how the pros reacted to the Polish champ’s latest title defense. Let’s just say they were impressed.

Joanna is the pound for pound best women's fighter ever!!! Love watching her throw

Joanna Jedrzejczky is the best striker hands down in the UFC regardless of gender. The best period. #UFC211

@joannamma vs @rosenamajunas is going to be an amazing fight !

I'm the only one that gives Joanna competition. We are the 2 best st weights in the planet. #nodoubt

JJ just a matador at this point, but one that punches, knees and kicks. #ufc211

Andrade is a bull.. great show of footwork from @joannamma 👌🏼 #UFC211

Love it to hear people say great job for Jessica for making it to the end.The fact that just making the end bell with @joannamma says it all

One of the most beautiful performances I've ever seen. The fucking GOAT @joannamma pic.twitter.com/F3KddQEpFO

I hope Joanna is making a million per fight. That performance was worth it #UFC211

Andrade is real tough. Gonna be about a month before that soreness subsides. #UFCDallas

Congrats OG @joannamma Champion!! #AndStillForever you are the Dopest! I'm so inspired every time i watch you fight pic.twitter.com/xImsvvvazD

With this defeat of Andrade, Jedrzejczyk moves to a flawless 14-0 overall. After debuting in the UFC with decision defeats of Juliana Lima and Claudia Gadelha, she captured the strawweight title with a second-round thrashing of inaugural champion Carla Esparza. From there, Jedrzejczyk defended with a TKO over Jessica Penne, and decision wins over Valerie Letourneau, Gadelha, Karolina Kowalkiewicz, and now Andrade.

Andrade, meanwhile, has a three-fight streak snapped by this loss. After dropping from bantamweight to strawweight after a submission loss to Raquel Pennington, she went 3-0 in the division, first picking up a TKO of Jessica Penne, then submitting Joanne Calderwood, and most recently, defeating Angela Hill in one of the best women’s fights ever. Having come up short against the champion, Andrade is now 16-6 in sum.

With her fifth title defense in the books, Jedrzejczyk is next expected to take on long time contender Rose Namajunas, who recently dazzled with a quick win over Michelle Waterson. Though the details on this anticipated strawweight title fight remain quite scarce, it is likely to occur before the year is out.

Do you think anybody is capable of taking the UFC strawweight title from Joanna Jedrzejczyk, or will the Polish destroyer retire undefeated? Make your opinions heard in the comments section! Sound off, PENN Nation!