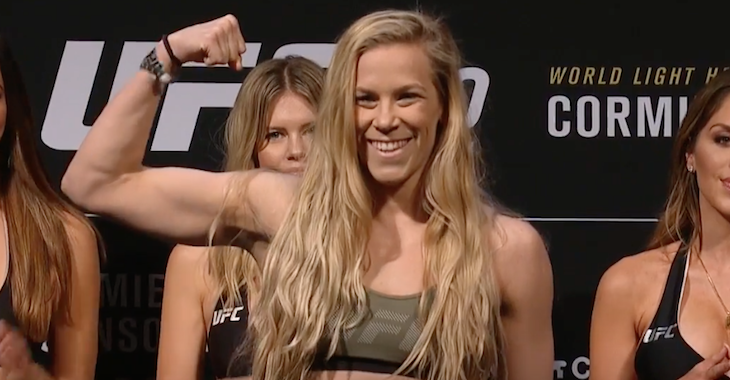 Round one begins and Chookagian lands a leg kick to start. She presses forward and throws a kick to the body that misses. Aldan circles out but Katlyn chases after her and lands a straight kick. Both women trade and land nice jabs. A good kick to the body scores for Chookagian. She circles out and then lands a nice front kick as Irene comes in. Aldana continues to press forward and lands a nice combination. Katlyn circles out and then scores with another good kick to the body. Aldana chases after Katlyn but misses with a wild right. Chookagian responds with a solid left jab. She shoots in a for a single leg but it is not there. Aldana circles out and then misses with a left hook. Chookagian comes forward and lands a left kick and then a good punch. She scores with a question mark kick. Katlyn is doing a good job of changing things up here. Aldana is trying to press the action but is eating kicks every time she comes forward. One minute remains in round one. Katlyn scores with another nice combination. Aldana returns fire with a right and then a hard leg kick. Katlyn shoots in and scores with a late takedown. Aldana gets up as round one comes to an end.

Scramble between @blondefighter and @irenealdanamma take us into the third round at #UFC210! How are you scoring? pic.twitter.com/9melgQA7N1

Round three begins and Chookagian lands a body kick to start. Aldan fire off a right but then Katlyn lands a beautiful four strike combination. Aldana circles away but Katlyn stays on her. Chookagian with another low kick and then a right hand. Aldana lands a low kick but then eats a right from Katlyn. Chookagian is pouring out a lot of strikes early here. She lands a pair of kicks. Aldana replies with one of her own. Chookagian circles and then lands a pair of hard low kicks. She shoots in for a takedown but it is not there. Katlyn lands a nice knee to the body inside. Aldana breaks free from the clinch and lands a right hand. Two minutes remain. Aldana goes to the body with a kick. Katlyn replies with two low kicks and then a left jab. Aldana is pressing forward but Chookagian is countering very well here. Katlyn with a nice front kick to the body. Aldana paws with her jab and then lands a right. Another good front kick to the body from Chookagian. Aldana replies with a low kick and then a left hook. Both women are firing off low kicks now. They switch to right hands. Good shots from both women to close out round three.