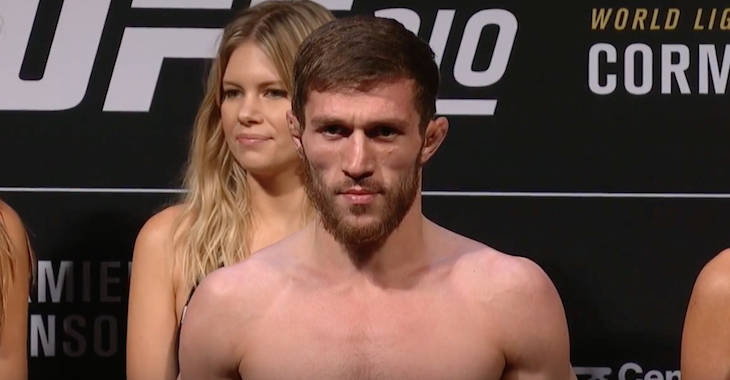 Round one begins and Lausa misses with a right hook. Magomed fires a spinning kick that misses the mark. He presses forward and lands a low kick. Lausa replies with a right hook. Bibulatov shoots in for a takedown but Lausa defends. Magomed scores with a knee and then they break. Bibulatov comes forward with a combination but Jenel is able to avoid the attempted strikes. Lausa presses forward with some shots of his own but he to misses the mark. Bibulatov with a spinning back kick. He circles out and then lands a low kick. Lausa leaps in with a right hand. Two minutes remain. Magomed lands a kick to the body. Both fighters are struggling to find their range. Bibulatov lands a spinning back fist but Lausa eats it and circles out. Magomed with a leg kick and then Lausa returns fire with one of his own. Magomed presses Jenel against the fence. He throws a knee but it lands low. The referee steps in and we have a brief break in the action. We restart and Magomed throws another spinning kick but it is blocked by Lausa. Bibulatov comes forward and throws a spinning back fist that just misses the mark. Jenel goes to the body with a right hand. Bibulatov shoots in for a takedown and lands a knee that comes just after the horn sounded to end round one.

Round two begins and Bibulatov throws a left hand and then a straight kick to start. Jenel charges forward with a combination. He lands a left hand. Bibulatov backs up but then scores with a spinning back kick to the body of Jenel. Lausa circles out. Bibulatov charges forward and lands a beautiful uppercut. Lausa eats it and then clinches up with Bibulatov, pressing him against the cage in the process. They break and Magomed misses with a spinning kick. He throws another kick but it lands low and once again we have a break in the action. Referee John McCarthy deducts a point from Bibulatov and we restart. Bibulatov with a left hand. He shoots in and scores a takedown. He moves immediately to mount. Jenel scrambles and is able to get back to full guard position. He lands a couple of nice elbows from the bottom. Two minutes remain. Bibulatov lands a nice right hand from the top. Magomed moves to half guard but Jenel immediately scrambles back to full guard. Bibulatov lands some good shots from the top to close out round two.

Beautiful uppercut by @maga_win at #UFC210

Round three begins and Bibulatov presses forward and lands a side kick. He misses with a follow up wheel kick. Magomed shoots in and picks up Jenel and slams him to the canvas. Big elbows from Bibulatov now. He is working from half guard. Jenel scrambles back to full guard. Bibulatov lands a nice left hand from the top. He switches to elbows. Two and a half minutes remain. Jenel tries to scramble but he ends up getting mounted by Magomed. Jenel eats a few shots but then is able to scramble back to full guard. One minute remains in the final round. Magomed steps over into half guard. Jenel eats an elbow and then scrambles back to full guard. Magomed closes out the final round with some good shots from the top.