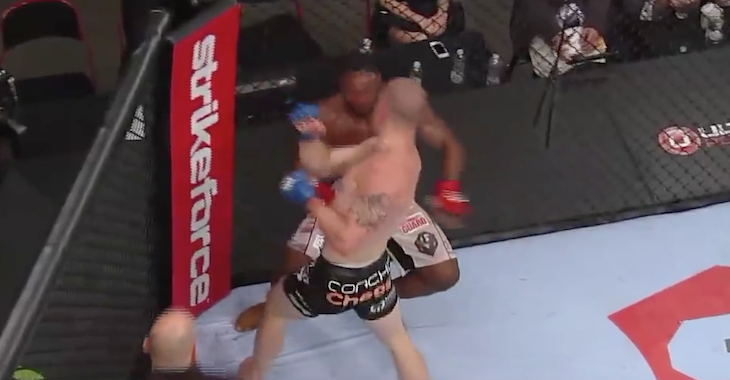 “Last week, the UFC’s Fight Pass Twitter page made an egregious faux paux when they tweeted a link celebrating Nate Marquart’s 2012 knockout of Tyron Woodley for the vacant Strikeforce welterweight belt before the promotion was folded into the UFC.

The tweet came on the heels of an announcement of a fight between Marquardt and Tamdan McRory, with the caption reading:

Remember when @NathanMarquardt did THIS to the current UFC Welterweight Champion?! #UFCFIGHTPASS pic.twitter.com/u4PRsaSLtR

Woodley responded to what he perceived to be a disrespectful gesture during Monday’s edition of ‘The MMA Hour’.

“Yes, I was knocked out, everyone saw that. If you ask me what my favorite three fights are that’s prob one of them. Before that fight everyone thought I was just a wrestler, but I was beating him until the KO, and I almost KOd him before I lost.”

“Showed a lot about me in that fight. My kids watched me get KOd in vicious fashion, and that was the first time and last time they seen me fight live. They haven’t seen me fight in person since that fight.”

“Then (the) Jay Heiron (fight) happened, and a few other knockout wins happened, and suddently people considered me as a striker and not just a wrestler.”

The newly-minted welterweight champion knocked out Robbie Lawler in the first round at UFC 201 in July. Woodley had initially responded to the Fight Pass tweet through Twitter himself, saying:

wow really? Show what I did 2 Koscheck, Condit, Kim, Lawler, Daley, Hieron. The disrespect! Also tell about the TRT exemption

The welterweight champ elaborated on why he found the tweet to be disrespectful, likening the situation to throwing shade, or in other words just straight up disrespecting someone:

“I just felt it was disrespectful. They call that throwing shade. They messaged me and apologized. They said we do not run the Fight Pass twitter page. When Robbie was champ we didn’t see his knockout loss to Diaz, or the Lorenz Larkin fight. No other champ has been promoted at their worst moment.”

“I understand what they are trying to do, maybe that wasn’t the intention.”

“And for a brief moment, I had some fans on my side,” Woodley joked.

Did you find the UFC’s Fight Pass tweet about Marquardt knocking out their welterweight champion to be disrespectful? Sound off, PENN Nation!