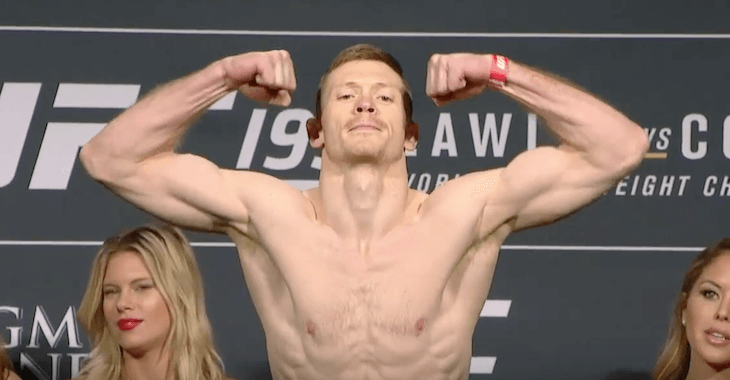 As one of the few men to not just beat but finish featherweight champion Conor McGregor, Joseph Duffy has become a regular in the UFC’s lightweight division. Now 16-2 in MMA, the Irishman is 4-1 in the UFC with his lone loss coming by decision to Dustin Poirier.

With one more fight left on his contract, however, Duffy was quite vocal about a pay increase on Monday’s ‘MMA Hour’:

“You look at other pro sports, we’re not making anywhere near that. If you don’t take a stand here, you won’t get what you’re worth. Without a doubt you got to keep an eye on the landscape.

I think most fighters are thinking we should be getting paid more, we’re dealing with injuries, concussions. One shot and it could all be over. I need to be in a position where I am financially stable.”

“You gotta play the hand that’s dealt. Al Iaquinta was on last week, our situations are very similar. A lot of fighters are starting to talk about it. We do this because we love it. But we put our body on the line. My dad’s involved in construction, it’s something I’ve actually thought away.”

Duffy referenced Al Iaquinta’s situation, which may keep him out of fighting for quite some time after a contract issue turned public. Although he has fought five times for the UFC with three first round finishes out of four wins in the Octagon, Duffy has only received one fight bonus for his submission of Ivan George in 2015. Bonuses have become a controversial issue, and were a large part of Iaquinta’s issue with the UFC.

When asked about possibly walking away from fighting if they money can’t pay the bills, Duffy didn’t hold back and revealed that money will certainly play a part in the future of his fighting career:

“I’m never gonna walk away from training. Fighting? I don’t know. It’s a difficult decision. I feel like maybe if I was a bit more secure maybe I wouldn’t have to worry about financials so much, I could just do it for the joy of it.” Now about to enter contract negotiations himself, Duffy said he will consider the open MMA market but most likely wouldn’t part with the UFC, as he believes the two will find common ground when coming up with his next contract.

“At the minute, it’s pretty much just waiting for a contract extension. One more fight, then test free agency and go from there.”

“I’m more than confident what I’m looking for is what I’ll get.”

Do you think Duffy will re-sign with the UFC after his next fight? Or will the Irishman possibly jump ship to Bellator like Rory McDonald and Benson Henderson? Sound off, PENN Nation!