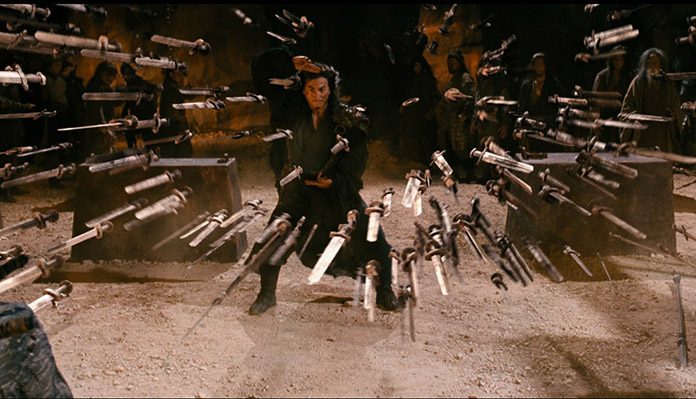 Part five in a series celebrating badassery in film and TV

Check out some picks for genre-bending martial arts flicks that feature kung-fu warriors adept at both hand-to-hand combat and eye-popping sorcery. And for post-apocalyptic science-fiction mixed with martial arts action, catch a new episode of Into the Badlands Sundays at 10/9c on AMC. This big screen version of the hit video game may have sanitized the bloody violence that fans of the arcade classic loved. But what it lacks in gory “fatalities,” it makes up for in fun special effects and sharply choreographed fight scenes. Scorpion, Sub-Zero, Reptile, Johnny Cage, Raiden (ably played by Highlander himself Christopher Lambert) and more favorites are here to do damage in the ultimate mystical martial arts tournament that’ll have you shouting “Finish him!” Writer/director/actor Stephen Chow (Kung-Fu Hustle) has a knack for mixing exaggerated comedic action with gravity-defying martial arts moves. In this hilarious action comedy, Sing (Chow) is both a soccer and shaolin kung-fu master whose “steel leg” gives him superhuman speed and the ability to kick a soccer ball and knock down a group of thugs like bowling pins. Our hero rallies his teammates, also skilled in martial arts, to defeat the appropriately named Team Evil in a match that involves feats (and feets) of supernatural strength

Zu Warriors From the Magic Mountain (1983) Fans of comic book-style action and ‘80s classics like Legend and The Neverending Story will find a lot to like in director Tsui Hark’s (Once Upon a Time in China) epic fantasy film. A smorgasbord of eye-popping special effects and high-flying kung-fu action, Zu Warriors from the Magic Mountain follows a mortal’s quest to obtain the legendary Dual Swords and destroy the Blood Devil. The film’s mix of gods firing laser blasts, monsters, swordfights and fisticuffs would later inspire John Carpenter to make Big Trouble in Little China One of several adaptations of the classic Chinese novel Journey to the West (AMC’s Into the Badlands also uses elements from the 16th century tale), The Forbidden Kingdom teams up Jackie Chan and Jet Li in an action-packed, special effects-heavy adventure. Chan and Li make a fun pairing, whether they’re fighting against each other in spectacular scenes choreographed by Yuen Woo-ping (The Matrix, Crouching Tiger, Hidden Dragon) or working together to train the young Traveler (Michael Angarano) in the ways of their ancient fighting style. The heroes on the half shell made their big screen debut in this radical 1990 film that combined ninja action, pizza-scarfing and lots of wisecracks. Compared to the sillier entries to come, the first outing is a darker, more serious affair with the Turtles taking down Shredder and the Foot Clan with their ninja weapons and frenetic kung-fu moves. And their shells, of course.

Master of the Flying Guillotine (1976) This gloriously over-the-top kung-fu flick has it all – fighters with stretchy arms and unbreakable skin, hilariously awkward dialogue dubbing and a blind assassin wielding a spiky “guillotine” hat on a chain. A sequel to writer/director/star Jimmy Wang Yu’s equally entertaining film One-Armed Boxer, Master of the Flying Guillotine has garnered a cult following thanks to its outrageous fight scenes and titular flying weapon. As the movie poster tagline says, “It’s a mean machine – cuts your head off clean!” The second film based on Chinese comic book series Fung Wan, Storm Warriors comes from Hong Kong genre favorites The Pang Brothers (The Eye). Wind and Cloud, two martial arts warriors, must harness their elemental powers against an evil warlord. Fans of the stylized fantasy action of 300 and Thor: Ragnarok will get a jolt from the slow-motion, special effects-heavy battle scenes.

For more genre-bending martial arts action, learn about the mystical world of Into the Badlands and watch new episodes Sundays at 10/9c only on AMC.