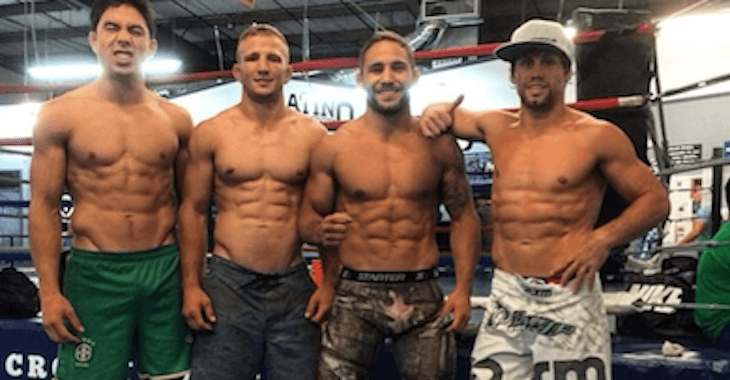 When former bantamweight champion TJ Dillashaw left his long-time home in Sacramento’s Team Alpha Male, it created something of a media frenzy, as it was reported again and again that his relationships with his former Team Alpha Male training partners had been damaged irreparably.

On the latest addition The MMA Hour, however, Dillashaw explained that things are not as tense as they seem between him and his former training partners. In fact, he was actually quite friendly with many of them during the buildup to UFC 207, when he defeated John Lineker, and current Team Alpha Male star Cody Garbrandt defeated Dominick Cruz.

“I saw [the Team Alpha Male guys] a couple times and said what’s up. I think it gets blown out of proportion a bit through the media. And then obviously Alpha Male is going to continue to blow it up because they’re getting a lot of attention from it and they think they’re making themselves look cool, but when we’re face to face, it’s not that big a deal. I’m going to say hi to them. I mean, I feel like I’ve created lifetime friendships with them, and if they’re going to show their true colors all I can do is put a smile on my face and and say what’s up. I’ve got no bad blood. I’ve got no reason no hate those guys other than the sh*t that Urijah was talking, and now the stuff that Cody’s talking. Everyone else, I’ve got some good friends. Danny [Castillo] was out training in Colorado until he got cut from the UFC. I’ve had Justin Buchholz in my corner for every fight except for the last two. He was the one that convinced me to actually make the move out to Colorado and told me that I was doing the right thing. I know those guys know that I did this because of their influences as well. It’s getting blown out of proportion a bit in the media.” Dillashaw went on to explain that he even made the effort to congratulate Garbrandt on his bantamweight title winning defeat of Cruz.

While Dillashaw is clearly attempting to keep things civil with his former teammates, it’s very likely that he and Garbrandt fight for the title in the near future. If the two Team Alpha Male veterans do scrap, who do you think wins? Sound off, PENN Nation!