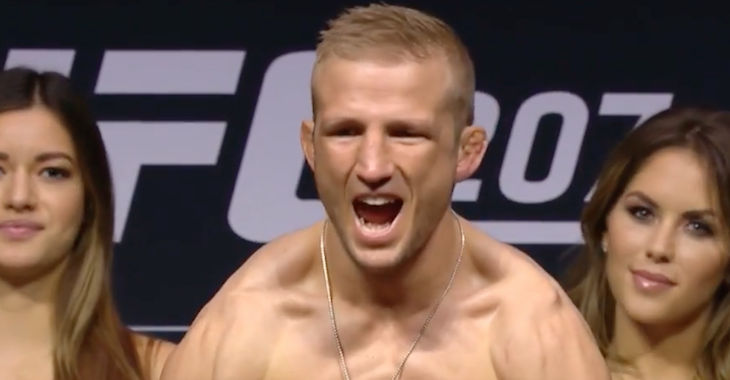 Round one begins and Dillashaw presses forward and misses with a head kick. TJ follows that up with a leg kick but Lineker catches it and scores a trip. TJ bounces right back up and then throws a leg kick. He circles out and then comes forward with another kick that Lineker catches and uses to score a takedown. TK quickly is able to scramble back to his feet and then immediately lands an uppercut and then a leg kick. Another leg kick from Dillashaw lands and he shoots in and scores an easy takedown. TJ moves quickly to half guard and begins working some short shots. Lineker gets back to full guard but TK quickly steps over and back in to half guard. Hammer fists from the former champ. John scrambles and gets back to his feet. TJ fakes a kick and then circles out. Lineker lands a kick but TJ counters with a right hand. Lineker with a punch to the body of Dillashaw but TJ circles out and then lands a kick. Lineker presses forward and lands a hard left. TJ takes it a fires right back with a right. Both men are down to throw leather now. The round comes to an end.

The crowd is getting into it! @TJDillashaw & @JohnLineker putting on a show so far! #UFC207 pic.twitter.com/DAAQdCCg5T

Round two begins and Lineker presses forward and lands a hard shot to the body of TJ. Dillashaw circles out and then comes forward and drops down and scores a takedown. He looks to take the back of John but Lineker scrambles and is able to get back to his feet. Lineker presses forward with some big bombs that miss. TJ replies with a hard kick to the body and then shoots in for another easy takedown. He begins working some shots from half guard. TJ is working the body of Lineker now. He switches to elbows and John is just eating them. They are talking to each other now. However it is TJ supplying all of the offense. Dillashaw moves to mount but Lineker quickly scrambles back to half guard. Big right hands from Dillashaw now. He is battering Lineker. More elbows and punches from TJ. He is laying a beatdown on Lineker here. John survives the round as the horn sounds.

The former bantamweight champ is putting it on Lineker!! @TJDillashaw turning it on in round 2!! #UFC207 pic.twitter.com/lIwWNXElw3

Round three begins and TJ opens up with front kick to the chest of Lineker. John throws an attempted body shot but it misses. Dillashaw is moving well here and using a lot of faints to keep John guessing. TJ goes upstairs with a high kick which is blocked. Lineker presses forward but TJ just drops down and scores another takedown. Lineker quickly scrambles back to his feet. He has his right hand loaded but just cannot seem to find Dillashaw with his strikes. TJ lands a nice counter right. John is chasing after him now. TJ shoots in and lands another takedown. He is putting on an amazing performance here. Nice right hand from the top by Dillashaw. Two minutes remain. Lineker gives up his back in order to stand back up. Dillashaw allows it and works some knees from the back position. He drags John back down and lands some hard shots. TJ drops for a calf-crank and gets it. Lineker is able to fight it off and get back to his feet. John charges forward and lands a pair of very hard body shots. TJ circles away and then lands a knee. Round three comes to an end.