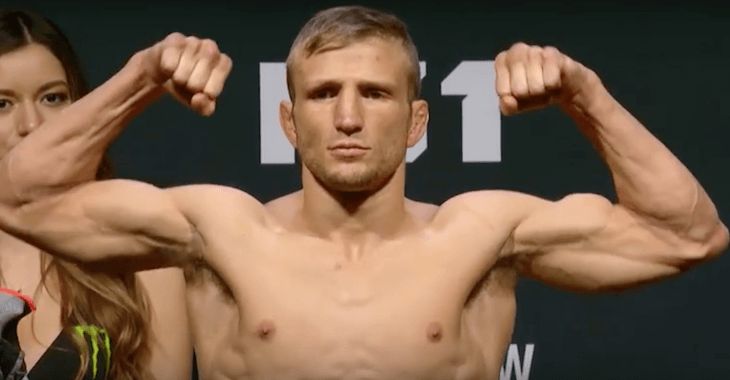 Former UFC bantamweight champion TJ Dillashaw is coming off a dominant performance against Raphael Assuncao at UFC 200 back in July, avenging his 2013 split decision loss to Assuncao as he cemented his place at the top of the bantamweight division.

Following the win over Assuncao, which returned Dillashaw to the win column after he dropped a controversial split decision to Dominick Cruz at ‘UFC Fight Night: Boston’ in early January, there was some speculation as to whether or not he would be getting a rematch with Dominick Cruz for the bantamweight championship. Unfortunately for the former Team Alpha Male standout, the UFC opted to give streaking bantamweight, and Team Alpha Male standout, Cody Garbrandt a title shot against Cruz at UFC 207 on December 30th, in what will serve as the UFC’s New Years Eve card. In addition, the card will play host to the highly anticipated return of Ronda Rousey, who will be returning to the Octagon for the first time following her UFC 193 KO loss to Holly Holm that saw her lose the women’s bantamweight championship.

While Dillashaw wasn’t given the title shot, there was much speculation as to when he would be booked for a fight following his dominant win over Raphael Assuncao back in July, however it now appears that fight fans will have to wait for Dillashaw to return to the Octagon a bit longer after receiving a gruesome cut above his eyebrow in training.

Dillashaw posted a photo of the injury to snapchat, which was quickly captured & then uploaded to the Sherdog forums. The cut will likely take several weeks to fully heal, and will likely keep Dillashaw sidelined for a brief period of time. When the former bantamweight champion is ready to return to the Octagon however, who would you like to see him fight? Play matchmaker in the comments section below PENN Nation!