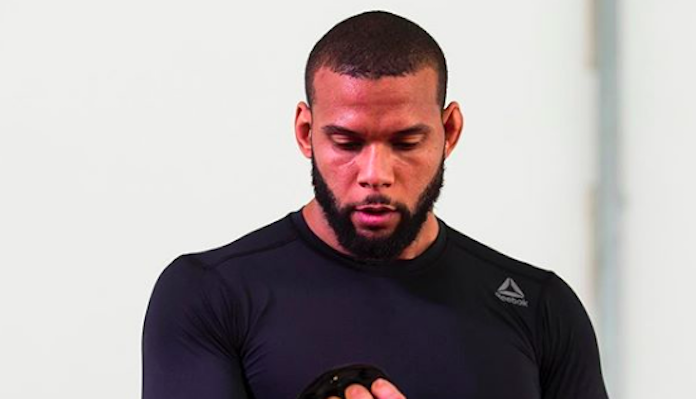 For a fleeting moment, Brazilian middleweight contender Thiago Santos was scheduled to fight British knockout artist Jimi Manuwa in the main event of last night’s UFC Sao Paulo card. That was after Manuwa’s original opponent, Glover Teixeira, withdrew from the card, and before Manuwa was forced off the card with an injury and replaced by middleweight Eryk Anders.

Having dispatched Anders in the wild, last-minute UFC Sao Paulo main event, Thiago Santos is now planning to stick around in the UFC light heavyweight division for the time being, where he hopes to be rebooked for a fight with Jimi Manuwa.

Speaking at the UFC Sao Paulo post-fight press conference, Thiago Santos announced that he would be sending Jimi Manuwa a message, asking him to fight in December when he is recovered from his current injuries.

“I’m going to send him a message right now,” Santos said (transcript via MMAjunkie) “I hope he recovers really well, and as soon as possible. And I hope to meet with him in December so we can fulfill the contract we signed.”

“So what’s most important is my health, regardless of fighting a guy who’s Jon Jones’ size or Alexander Gustafsson,” he said. “But if I’m healthy, it’s going to be a war for them. They can expect that.”

That being said, Thiago Santos said a return to the middleweight division is not out of the question — especially if he finds himself outgunned against the powerful British puncher Jimi Manuwa.

How do you think Thiago Santos will perform at light heavyweight? Do you think he can take out Jimi Manuwa?