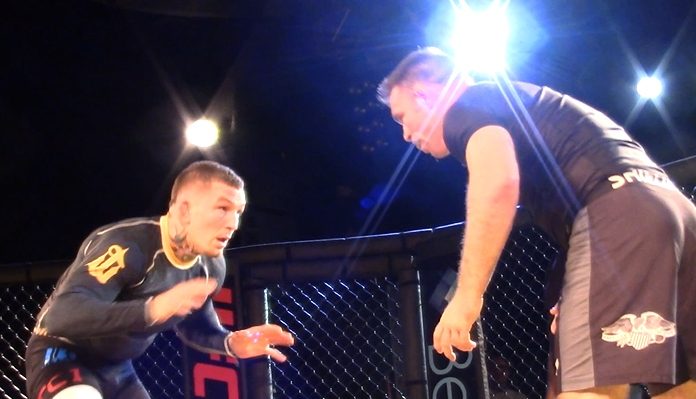 After a lengthy hiatus, Chael Sonnen’s Submission Underground grappling promotion made its return Sunday evening with SUG 8 in Portland, Oregon. As usual, it was another fun event.

Starting the night off was tag team action! That meant two on two and whichever team wound up with the most submissions by the end of the eight-minute mark were the winners. In the event that no submissions were scored or each team had the same number by the end of the match, the bouts were decided via loudest crowd reaction.

The most notable of the four tag team matches that took place was without a doubt, Team Straight Blast Gym (SBG) vs Team Combat Athletics Academy (CAA). Prior to this match, there were only two submissions combined between the four teams that competed… well, challenge accepted for SBG’s Amanda Loewen.

As soon as the match started, Loewen worked her way into an armbar and finished it in a mere eight seconds. Before the time had expired, Loewen found herself adding the likes of two rear-naked chokes, a guillotine, a heel hook, and another armbar to her score tally that literally carried her team to a 6 to 1 victory. The Oregonian managed to score a submission essentially every time she was tagged into the action.

The featherweight BJJ black-belt is 3-0 as an amateur in MMA and continues proving that she’s absolutely one to watch out for.

Kicking off the main card, we finally got to see the once upon a time Strikeforce lightweight title clash between Gilbert “El Nino” Melendez and Pat Healy.

Melendez would end up controlling the majority of the regulation round by pinning Healy up against the cage after getting a takedown. In overtime, each man would attempt rear-naked chokes with the exception of Healy trying for an armbar in his third and final attempt. In the end, Melendez was able to get the quicker escape times.

Australian BJJ wizard, Craig Jones followed as he took on seasoned MMA veteran, Dennis Hallman. And the match would barely even get going as Jones finished Hallman in a surprising 12 seconds by heel hook. “Superman’s” leg was visibly damaged afterward.

Are you watching closely..? #SUG8 #UFCFIGHTPASS

Craig Jones adds another leg to his collection. In 12 seconds. pic.twitter.com/aupkFZQuyb

The lone heavyweight meeting of the night saw Gracie-Barra Portland’s own Fabiano Scherner take on current Bellator staple, Matt Mitrione who was filling in for Frank Mir.

Mitrione controlled Scherner comfortably for almost the entirety of regulation. But once in overtime, the Brazilian only need 34 seconds in the first round to get his armbar. Mitrione was unable to beat that time on his turn thus giving the professor the W. He’s now expected to face former UFC title challenger, Gabriel Gonzaga next.

Result: Scherner def Mitrione via armbar at 0:34 of overtime round 1

Fabiano locks the armbar in OT – @mattmitrione has :34 secs to return the favor! #SUG8 #UFCFIGHTPASS pic.twitter.com/s1FaADuv2Q

The evening’s co-main event was a rematch of the UFC on Fuel 1 headliner in February 2012 when Jake Ellenberger took on Diego Sanchez.

In a rather close regulation, the overtime rounds would see a somewhat different story unfold. A near-immediate armbar escape from Ellenberger gave him a big edge in favor of the time before the final round that saw him work for a rear-naked choke for over a minute. Ellenberger goes 2-0 against “The Nightmare.”

Looks like @DiegoSanchezUFC just spit his mouthpiece out to survive that squeeze! #SUG8 #UFCFIGHTPASS pic.twitter.com/WUb8qSpKl8

Regulation saw the two competing in more of a wrestling match than anything as the two were pretty evenly matched in the strength department as they attempted takedowns and fought against the cage for superiority. No submission attempts presented themselves.

Overtime would see the legendary American Jiu-Jitsu practitioner in Shields earn himself yet another SUG title.

4, but who's counting? #SUG8 #UFCFIGHTPASS

See the rest of the night’s results below: