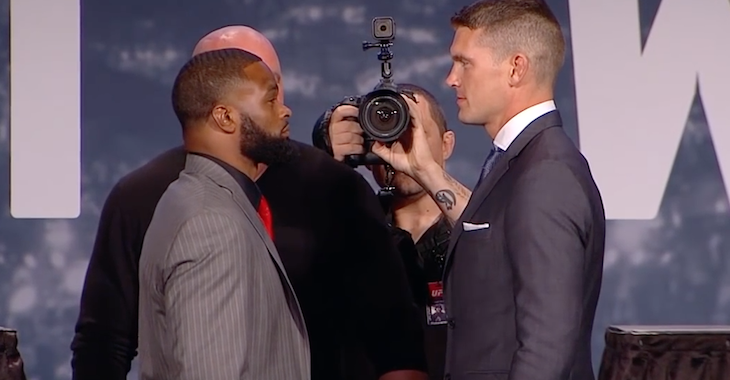 In the co-main event of UFC 205, welterweight champion Tyron Woodley will put his 170 pound strap on the line as he faces arguably the greatest striker in the UFC today, Stephen ‘Wonderboy’ Thompson.

Thompson, who rides a 7-fight win streak into the bout that has seen him pick up several spectacular highlight reel finishes, most recently put on a stunning performance in Ontario, Canada, where he defeated top ranked welterweight Rory MacDonald by unanimous decision, picking apart the welterweight star over the course of 5 rounds. Prior to that, Thompson earned himself a ‘Performance of the Night’ bonus as he TKOd former UFC welterweight champion Johny Hendricks, becoming the first man to stop ‘Big Rigg’ over the course of his MMA career.

Now, as he gears up to face the heavy-handed Tyron Woodley, many expect Thompson to pick Woodley apart much the same as Rory MacDonald did to Woodley at UFC 174 in 2014. Despite that, Wonderboy is gearing up for a 5-round war. “If you look back at his fights, he doesn’t throw a double or go for the takedown very often. Tyron wants to put those hands on you and wants to try and knock you out. I think once he gets a little frustrated, obviously he’s gonna try and do that, just like everybody else that I’ve faced. I think pretty much the hardest opponent in the division is Rory MacDonald. I mean, Rory pretty much schooled Tyron Woodley. But I can’t take this guy lightly and that’s how I go in looking at this fight. A lot of people are like, ‘oh man, you’re gonna crush this dude and Tyron Woodley, he smoked him’ and you know what, I don’t think like that. I’m not the type of guy to do that. Because I want to prepare for the best guy, and that’s Tyron Woodley. That’s the guy standing in front of me. I’m preparing myself as if this is going to be the hardest fight that I have ever faced – and it possibly could be. I want to be ready for five, five-minute rounds.”