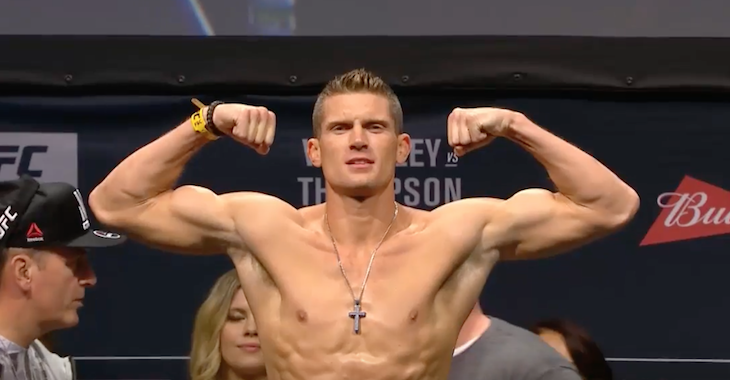 Although he is currently on the shelf, that hasn’t stopped fellow fighters from calling out Thompson for a future fight. Case in point being Gunnar Nelson, who called out “Wonderboy” following his victory over Alan Jouban last month.

Stephen Thompson sat down with BJPENN.com’s Chris Taylor on today’s episode of ‘Rapid Fire’ where he explained why he is not interested in a fight with Gunnar Nelson just yet.

“Well you know, yea Gunnar Nelson has been putting it out there. Which is, well, I kind of expected it a little bit. You know especially from someone in the top ten. I expected callouts from the top ten guys. I think he (Gunnar Nelson) is ranked number nine right now. But here is the thing, the guys in or near the top ten who he (Gunnar) has fought, he lost to them. Rick Story and Demian Maia. So with that said, he is really not on my radar right now. I’m eyeing someone in the top five for my next fight. Someone like Carlos Condit or Robbie Lawler would be great.” With that said, “Gunni” is just 3-2 in his past five fights, suffering decision losses to the opponents Thompson named, Rick Story and Demian Maia, during that stretch.

Unfortunately for Thompson, the opponent he was most hopeful to face next, Robbie Lawler, was just booked for a scrap with Donald Cerrone at July’s UFC 213 pay-per-view event earlier this evening.

With that said, there is another welterweight opponent that seemed to perk “Wonderboy’s” interest, former Strikeforce champion Nick Diaz.

“Oh yeah, definitely” he said, when asked about the possibility of a fight with Nick Diaz. “I know the UFC has been offering him and his brother some fights and they have been turning them down or whatever. But if Nick was willing to go then for sure. I would love to fight Nick Diaz! He’s been in the game a long time and I know [the UFC] will push him right near the top anyways. So yeah, that could be a possibility. I would love to scrap with old Nick. I have a lot of respect for him. That would be a fun fight. Like Robbie Lawler, Nick pushes the pace. I think it would make for an exciting fight for the fans. Those fights would be wars. I think the fans would be happy with that.”

Who would you like to see Stephen Thompson fight in his octagon return? Sound off PENN Nation!