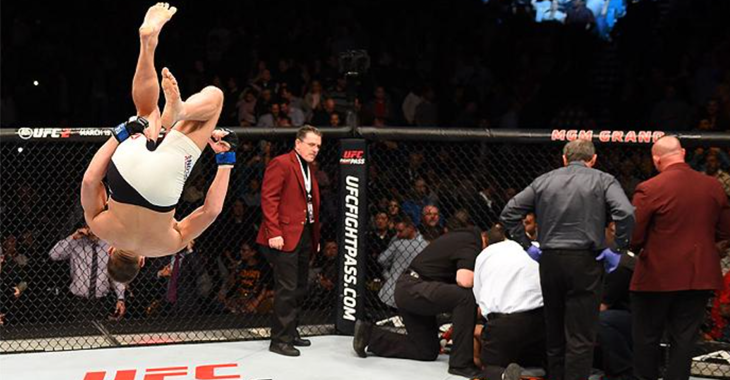 It was a matchup of styles in the main event of UFC Fight Night 82 featuring former UFC welterweight champion Johny Hendricks and rising star Stephen “Wonderboy” Thompson. Hendricks who is a former NCAA Division I All American and champion faced the former world champion kickboxer Thompson. Hendricks failed to implement his strengths as a wrestler to get the fight to the ground and faced the consequences of Thompson’s superior striking getting finished in the first round.

Check out what those from the MMA community had to say about Thompson’s highlight reel finish of “Big Rig.”

TJ Grant @TJ_Grant
That was one heck of a clean performance by wonderboy. Johnny will learn and evolve from this

Mike Brown @mikebrownmma
MMA has gone through so many changes. Congrats to Wonderboy beautiful performance.

Tecia Torres @TeciaTorres
Wow!!! @WonderboyMMA I’ve been a fan for some time now but gosh!!! @ufc Love the footwork and style. #karate #ninja

Chris Weidman @ChrisWeidmanUFC
What!!!!! My brother @WonderboyMMA is a beast !

Kenny Florian @kennyflorian
Wonderboy indeed. His ability to read body language, find angles & create is unlike any welterweight out there. Striker supreme. #UFCVegas

Kyle Kingsbury @Kingsbu
OMFG!! @WonderboyMMA I was a fan before but WOW!! Holy shit!

What did you think of Stephen Thompson’s performance? Share your thoughts with us in the comments!