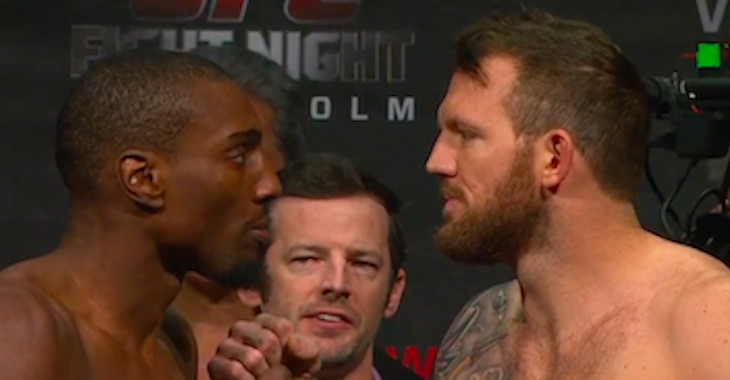 Earlier this week, we learned that long-time UFC light heavyweight contender and TUF season eight winner Ryan Bader had signed with Bellator MMA. The dangerous light heavyweight talent has wasted no time in attempting to book his first fight with the organization, calling out the light heavyweight champ Phil Davis for a fight at Bellator 180 this June 24 in New York City.

Luckily for him, Davis seems all for it.

The pair worked out the details of this potential title fight on Twitter on Monday evening. See their exchange below.

Bader and Davis, of course, are plenty familiar with one another, having fought back in January of 2015. On that night, Bader walked away with an undeniably forgettable split decision win. As forgettable as Bader’s defeat of Davis was, however, it was extremely close, which means the grounds for a rematch are certainly there – especially now that the two fighters stand out as the two top talents on the Bellator light heavyweight roster.

Bader and Davis’ shared interest in fighting on the Bellator 180 lineup is certainly understandable. Though the card was only just announced, it already stands out as the biggest event on the promotion’s calendar.

The event, which will mark the organization’s debut in New York City, and just the second pay-per-view it has ever promoted, will be headlined by a long-awaited light heavyweight showdown between three-time UFC light heavyweight title challenger Chael Sonnen and Pride legend Wanderlei Silva. The co-headliner, meanwhile, will pit MMA legend Fedor Emelianenko against dangerous UFC veteran Matt Mitrione in a mammoth heavyweight collision. It’ll all go down inside the hallowed combat sports hub of Madison Square Garden.

Are you interested in seeing a Ryan Bader vs. Phil Davis rematch in the Bellator MMA cage? Sound off in the comments section, PENN Nation!