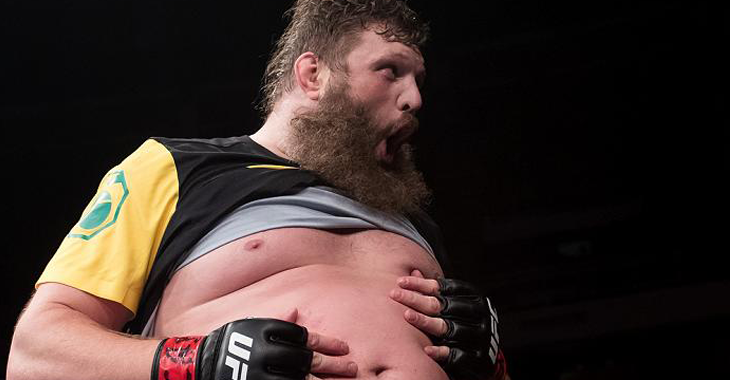 Frustration and emotion caused an odd incident to occur at UFC Fight Night 95 in Brazil over the weekend.

Following the heavyweight bout between Roy Nelson and Antonio Silva, Nelson kicked referee “Big” John McCarthy after what Nelson explained what he thought was a late stoppage.

Nelson was outraged by how long it took McCarthy to call an end to the bout and feels he delivered more damage than necessary to his opponent, who is also a close friend. “I didn’t want to hurt ‘Bigfoot’ more than I had to,” Nelson said. “And I got taken by the moment, because it’s like I’m beating the sh*t out of somebody and you’re like, dude, enough is enough. And for me, it hurt my feelings. And I apologize to Big John, but I wouldn’t take it back. It just hurt me, that I’ve got to keep on hitting a guy that doesn’t need to be hit.” “Even though CABMMA understands Roy Nelson’s ‘frustration’ in that situation due to his close relationship with his opponent, that does not justify his act and can open a serious and dangerous precedent in the sport,” Sampaio in the email to MMAjunkie. “We, as the regulation body of MMA in Brazil and member of the Association of Boxing Commissions, will not tolerate such conduct.

“All the licensed professionals involved have to act accordingly, respecting the rules, commission, promoter and fans, where unsportsmanlike behavior will be subject to fines and suspensions.”

Sampaio stated that a few members of the Superior Justice Court witnessed the incident and will be handling Nelson’s case directly. “CABMMA does not have to file a legal complaint; it’s (the court’s) duty to start an immediate investigation,” Sampaio added.