Home » MMA News » Rousey vs. Cyborg Getting Closer To A Reality Conf... 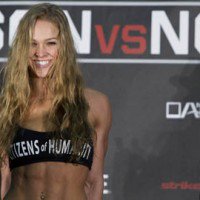 With all the recent talks of Anderson Silva vs. Every Other Champion In the UFC, one super-fight that actually has a better shot at transpiring is the Ronda Rousey vs. Cris “Cyborg” bout.

The hang up in this fight is the weight-class. Ronda Rousey currently holds Strikeforce gold at 135 pounds. “Cyborg” on the other hand held onto her championship reign at 145 pounds before being stripped of her title for performance enhancing drugs.

The new face of women’s MMA, Rousey, refuses to go up in weight for a fight with the former featherweight champion and “Cyborg” refuses to go down. The only thing these two can actually agree upon is that they do not like each other and wish to settle their differences in a cage.

Last night following UFC on FX 5, UFC president Dana White stated that he believes he is close to making the fight happen, but he failed to divulge any real information on the topic.

I think we are [close to making the fight happen,” White stated. “You’ve been seeing me hang around with Ronda a lot, so I’m working on it.”

So while MMA fans are clamoring for a super-fight in any capacity, the one that may actually unfold looks like Ronda Rousey vs. Cris Cyborg.