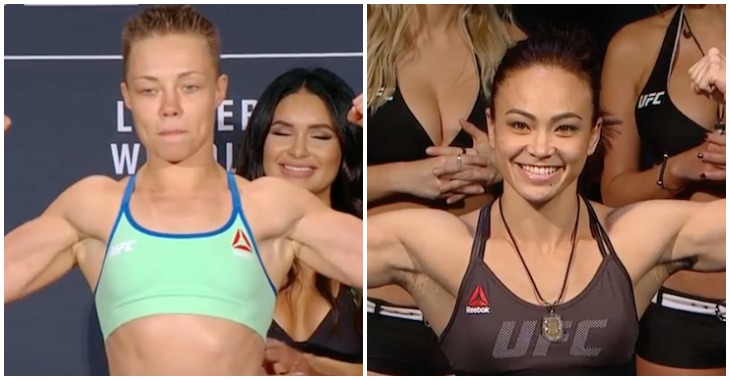 Long-time strawweight contender Rose Namajunas is currently riding a loss to Karolina Kowalkiewicz, and she knows just who she wants to fight to bounce back from that loss. The ever-entertaining strawweight has been vocal in her desire for a fight with “The Karate Hottie” Michelle Waterson, who scored a first-round submission win over Paige VanZant last month.

Waterson, of course, isn’t the highest ranked opponent Namajunas could have called out. Claudia Gadelha and Jessica Aguilar both enjoy a higher station in the strawweight division. According to Namajunas, however, Waterson is a more marketable opponent than either Gadelha or Aguilar, which is why she called her out.

Namajunas explained her rationale in a recent interview with Fox Sports.

“I don’t know if she’s quite ready for the champ just yet,” Namajunas said of Waterson. “I’ll fight the champ right now, too but it’d be hard to make a case for it coming off a loss. At the same time, I’m okay with anything but this one just makes the most sense to me. We all know that this is a business, we all know this is the money fight and this is what people want to see. As much as a killer as Jessica Andrade is or Claudia Gadelha, as much as they are formidable opponents and somebody I would like to face one day, it just doesn’t seem like the most marketable thing for me. I think people want to see me fight no matter, no matter who the opponent is, but why not? Why not put two pretty girls in there that can also throw down, that both beat Paige (VanZant), both know taekwondo or karate, it just makes sense. It doesn’t quite make sense for me to take fights that won’t generate the most noise. I’m trying to make money here as well as be the best in the world. So she just makes the most sense for both.”

Are you interested in a Rose Namajunas vs. Michelle Waterson showdown? Sound off, PENN Nation!