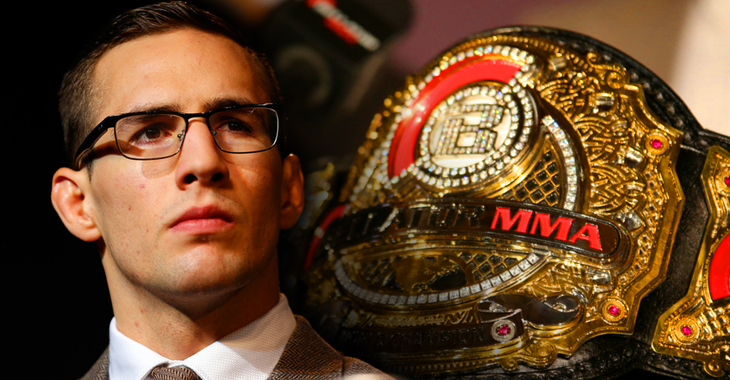 Just a week ago, Bellator announced that recent UFC transplant Rory MacDonald would challenge Douglas Lima for the welterweight title early next year. A win would not only help MacDonald achieve something he was never able to in the UFC, but serve as the first step the journey he sees in his mind’s eye. It’s a quest for not just one gold belt, not even two, but three Bellator titles.

“I’d go for three. I’d fight [Ryan] Bader. [Welterweight]’s gonna’ be my home. That’s where I fit. I’m not a massive guy. I’d be a small middleweight, it would be a joke to see me at light heavyweight, but I still think I beat them. I think they’re not getting too far ahead of themselves, but I’ve brought it up to [Bellator]. They know my intentions and stuff.”

“We’ll see when I get there. I’ve got a big fight here with [Douglas Lima]. I’ll take care of that first and go from there. But in my mind’s eye, I see that. I can’t guarantee you that, at the end of the day, it’s Bellator’s decision. My motivation is yes. My choice is yes, but I also have a promoter to work with. This isn’t just me calling the shots here, but if I could, I would. I’m not too worried about it [the weight difference], I’ll figure it out. I’ll make the weight class, that’s for sure — 192lbs or something.” — Rory MacDonald speaking to MMA Fighting.

It was back during an R/MMA Q & A on Reddit that Rory MacDonald revealed his plan to fight Gegard Mousasi if both of them win their respective title fights. Although, Mousasi will have to win his Bellator debut against Alexander Shlemenko, get a title shot and win the middleweight belt himself. Current Bellator light heavyweight champ Ryan Bader, will defends his title against Linton Vassell at Bellator 186. Although it’d be cool to see Roy MacDonald challenge for belts in high divisions held by former UFC fighters, we’re sure MacDonald wouldn’t care who the opponent was when the time came.