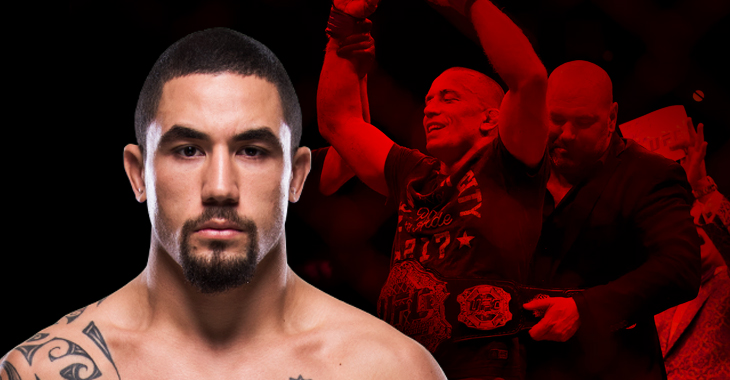 If it weren’t for Robert Whittaker suffering the knee injury he did prior to and in the Yoel Romero fight at UFC 213, it’s very highly unlikely that Georges St-Pierre would have had his middleweight title shot at UFC 217.

When Whittaker and Romero fought, it was for the interim championship as the undisputed champ at the time, Michael Bisping has been sidelined himself. But after Whittaker’s big victory, he was unable to follow up with the unification title fight with Bisping which led to GSP’s return and taking of the title in an incredible performance.

Only thirty days later, St-Pierre vacated his title after announcing he was battling colitis and didn’t want to hold up the division like many were afraid he might. This action promoted Whittaker to the now undisputed king of 185 and never gave him the chance to fight the MMA great, something Whittaker wasn’t too surprised about as he told MMAFighting:

And in my opinion, the rankings and the division, the way it should work is you have your champ, you have your #1, your #2, and the champ fights one, two fights one, three fights two, and you work your way up like that. And I just feel like, with Georges getting in there and proving to everyone the caliber of fighter he is, and that he can still get in there and do what he’s supposed to do, and the belt coming to me after I fought my way through some tough guys, the best in the division, I feel this is like a return to normalcy.

I was split, it was hard. I thought maybe if we fought in Montreal, we get a big pay-per-view, he [St-Pierre] may want to fight me because realistically, he doesn’t have too much to lose with that fight. But, yeah, there was always that part of me that thought, ‘No, there’s no way he’s going to take that fight with me.’ It’s a hard fight for anyone on any given day. And like he showed and he said, it’s not his division. He’s not built for the division the way that I am or other middleweights are, so it was hard for him to get up to the weight and to utilize that weight properly. I always knew there was a very big chance he was just going to take off and not fight. I was just hoping he wouldn’t take another fight on the sidelines and just hold up the division once again.”

This weekend the UFC will hold it’s first event in Perth, Australia for UFC 221, a card that Whittaker was supposed to make his first title defense on but was unfortunately forced out of due to a nasty intestinal staph infection. Stepping in for him to take on a former champion, Luke Rockhold is Yoel Romero. Winner walks away with the interim title and a shot at Whittaker once he’s ready to return.