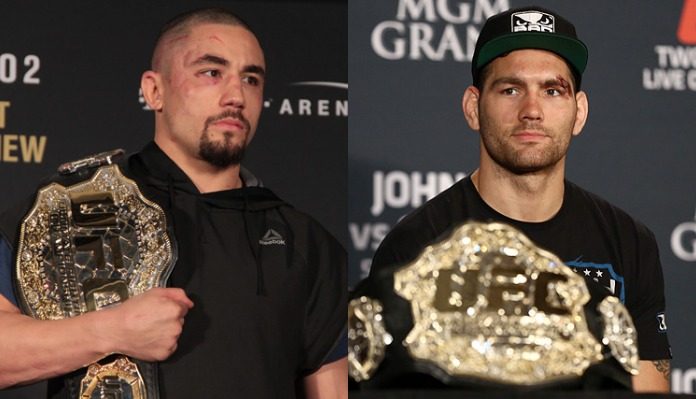 Over the last few weeks, middleweight contenders Kelvin Gastelum and Chris Weidman have been verbally sparring over who deserves the next middleweight title shot. Now, UFC middleweight champion Robert Whittaker’s team seems to have decided for them.

According to Whittaker’s manager Titus Day, Whittaker is hoping to defend his title against the former champion Weidman at UFC 231 in November, which is expected to occur inside Madison Square Garden in Weidman’s native New York.

“Madison Square Garden is a possibility,” Day told The Daily Telegraph of Whittaker’s next fight, insisting Whittaker’s broken hand should be healed by then.

“Rob’s the middleweight champ and his last two fights have been wars. So if his hand heals up as quickly as we’re hoping, we would definitely push for him to compete at the greatest fight arena in the world. And Chris Weidman, as the former champ, would be a perfect rival for that fight.

“I’ve spoken to Rob this week and he definitely wants to be ready by the end of the year.

“His surgery went well, it was a clean break which is the best you can get, and there doesn’t seem to have been any complications. So if all goes well, we’ll definitely look at that New York card. It’s traditionally one of the biggest on the UFC calendar and after the way Rob has won his last two fights over in the States, there is huge interest in him now.”

Whittaker last fought in June, when he captured a hard-fought decision from the fearsome Yoel Romero in a 2018 Fight of the Year contender.

Weidman, meanwhile, has recently been nursing an injury. He hasn’t fought since July of 2017, when he submitted Gastelum in the third round of an exciting fight.

At present, no fights have been booked for the UFC’s return to Madison Square Garden, but as Day suggests, it’s likely to be one of the biggest cards of the year.

Do you want to see Robert Whittaker and Chris Weidman fight at MSG?