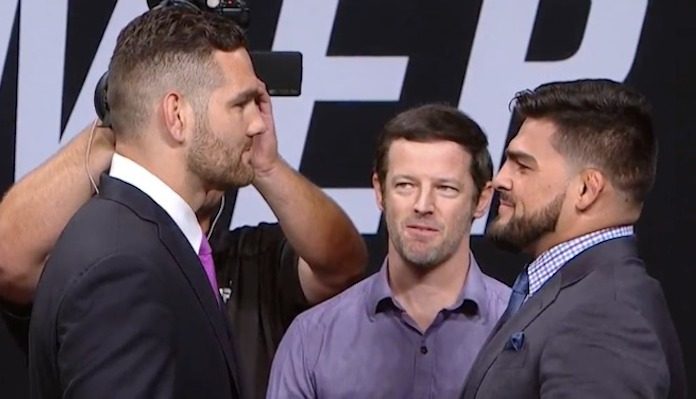 Now that Robert Whittaker has defeated Yoel Romero for a second time — he did so by decision in the main event of UFC 225 — there are two clear frontrunners in the race to the next middleweight title shot. One is former middleweight champion Chris Weidman. The other is streaking contender Kelvin Gastelum.

Weidman believes he deserves the next middleweight title shot because he submitted Kelvin Gastelum in his last fight. He also believes that his accolades as a former middleweight champion — with three defenses to his name — outweigh his three recent losses to Luke Rockhold, Romero and Gegard Mousasi.

“I feel I am the most decorated guy in the division, I’ve had the most title defenses,” the former champion said on a recent episode of The MMA Hour. “I had a rough patch, I went undefeated my whole career, I lost one, happened to lose three in a row.”

Gastelum’s argument, meanwhile, is that his recent record is better than Weidman’s. Though he did recently lose to Weidman, that loss is sandwiched between defeats of Tim Kennedy, Michael Bisping and Ronaldo “Jacare” Souza.

On Wednesday evening, the two middleweights got into it on Twitter over who should get the next crack at Whittaker.

CHRISPY
If…
-your argument for consideration for a title shot is based upon being the "most decorated", then Whittaker should fight the Christmas Tree at Rockefeller Center this Fall…

“Chrispy,” Weidman said. “If your argument for consideration for a title shot is based upon being the ‘most decorated’, then Whittaker should fight the Christmas Tree at Rockefeller Center this Fall…”

This Tweet, unsurprisingly, did not go over well with Weidman — particularly the nickname “Chrispy.”

“Chrispy?” Weidman added. “Now it’s personal… My argument is simple. I am ranked ahead of you and I finished you in my last fight.”

Needless to say, both men have a strong case for the next middleweight title shot. Do you think the opportunity should go to Chris Weidman or Kelvin Gastelum?