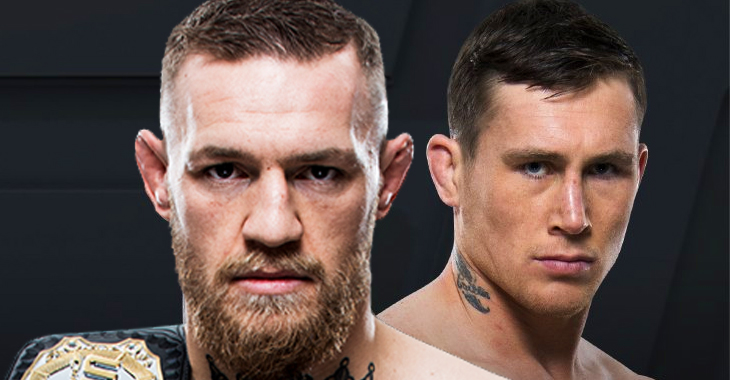 With as much happening in the welterweight division, one hard-hitting Scouser can’t get anyone to fight him. Darren Till wanted to test Stephen ‘Wonderboy’ Thompson’s Karate techniques, but that looks like it’s not happening. He was rooting for Mike Perry to win at UFC Winnipeg to finish what they started at UFC Gdansk, which didn’t pan out. Finally, he’s turned his sights on Rafael dos Anjos and Santiago Ponzinibbio. After finishing Donald ‘Cowboy’ Cerrone, Till is a hot commodity hoping to leverage for a big fight. Of course, no fight would ever be bigger than Conor McGregor, although Till says he’s not there yet.

“I’d love to fight Conor [McGregor] but I don’t know what Conor wants to do. What does Conor want to do? Does he want to fight with [Paul] Malignaggi? I heard he was meant to be fighting [Manny] Pacquiao. Does he want to fight to reclaim his belt or defend his belt at lightweight? Does he want to go to feather? You know, you don’t really know with Conor. He’s the biggest name in sports. At the moment I’m, shall we say, insignificant. There’s way more bigger options. But along the line, if he wants to come up to welterweight and fight a superior striker in myself, me and him, we can bounce. […] Right now, I just want to be the greatest fighter in MMA. In the whole of MMA.” — Darren Till speaking to Obviously Fight Talk.

Delighted to announce i am now a part of the @mtkglobal team. MMA is not gonna be the same when we are finished!
The new era has begun 🦍 pic.twitter.com/L1nv6owI9h

Whenever a brash European comes around and starts knocking out opponents, Conor McGregor comparisons are always inevitable. We’re all not holding our breath about a possible fight with Darren Till, but it’s fun to talk about. However, we all know how wild and unpredictable this fight game is. Till is only 24-years old and sits at seventh in the rankings, if he keeps things up he could be in line for a possible title shot in two or three fights. Put a belt on him and suddenly a fight with McGregor becomes more of a possibility. For right now though, Darren Till’s focus is on just becoming the very best in the MMA fighter in the world.