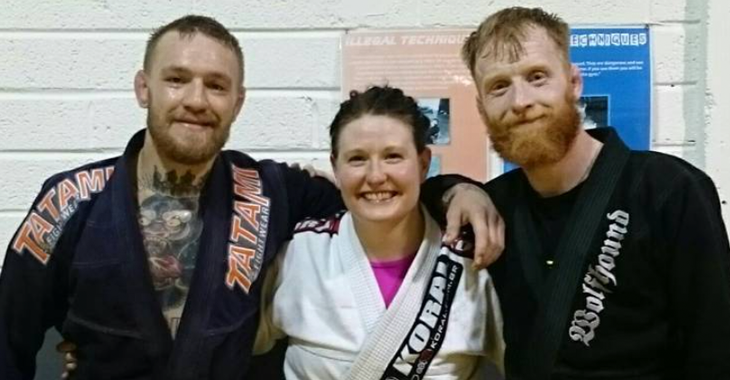 UFC lightweight champion Rafael dos Anjos and UFC featherweight champion Conor McGregor were supposed to meet in a superfight at UFC 196. However, Dos Anjos broke his foot leading up to the fight and Nate Diaz stepped in as a late replacement and now dos Anjos is no longer in the picture to fight “The Notorious.”

This hasn’t stopped dos Anjos from getting his jabs in on McGregor when he can.

Daly posted another photo of just the three brown belt teammates and dos Anjos saw something that made him laugh.

Many moons ago we started this journey as hopeful white belts. Last night we rolled all 3 of us as brown belts. A mark of progress on this beautiful journey. There's a window of opportunity for MMA competition, BJJ is for life. #happy #proud #grateful #SBG #BJJ #MMA #UFC #team #family #brownbelts

Dos Anjos reposted a cropped version of Daly’s post on his Facebook and said in the caption, “Brown belt and don’t know how to tight the belt, what a joke 😂😂😂😂😂||—>>>Faixa marrom e@não sabe amarrar a faixa, que fanfarrão 😂😂😂😂😂”

While McGregor wears the brown belt when rolling in his BJJ gi, Nick Diaz feels the BJJ skills of “The Notorious” are more #whitebelt level.