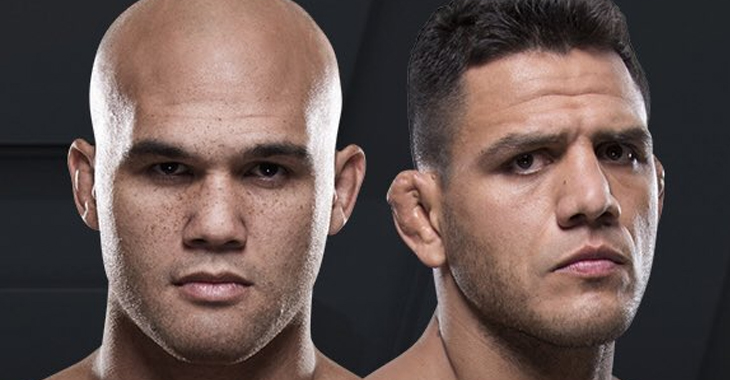 After back-to-back losses at lightweight and losing his UFC title, Rafael dos Anjos abandoned the division and decided to move up to welterweight. It was something he was thinking about even before his victory over Donald “Cowboy” Cerrone. The experiment has been successful so far. He’s earned wins over Tarec Saffiedine and Neil Magny in a Performance of the Night. He recently opened up about his rejuvenation and upcoming bout with Robbie Lawler and is hyped up for a good old school battle between two gamers.

“I can live. I can eat normal. I don’t have to have that feeling after having my meal of still being hungry. Now, if I feel hungry I can eat again if I want. […] Before, 70 to 80 percent of my camp was focused on losing weight and being stressed out about making weight. Now, I still have to cut some weight, but it’s way easier. I can have a normal life, I can enjoy my life and my training and put a hundred percent of the work into my technique and training and not just losing weight and being stressed out. It’s been a very good moment for me. I’ve been around for so long, but I’ve never been as happy as I am now.”

“[We don’t talk trash and] that’s the good part of it. [Robbie Lawler and I are] gonna’ go there and we’re gonna’ take care of business like men, like fighters. I miss that old school feeling. These days, all these guys trash talk on Twitter and other social media and I’m not good at it. I’m good at fighting, and Rob is as well. It’s gonna be great and we’re gonna put on a great show for all the fans. I’m 33 and I feel that I’m at the best moment of my career, physically and mentally. I’m just happy to make the move up a weight class and everything else is coming along well in my life – family, everything is great, and it’s a great moment right now.” — Rafael dos Anjos speaking to UFC.com via Thomas Gerbasi.

No talk. No social media jabs. No throwing Monster cans at press conferences. Just two worthy opponents who bring the action going at it. In our present time, the lack of trash talk may hurt a fight, but for some reason it’s probably not an issue between Rafael dos Anjos and Robbie Lawler. Fight fans are going to tune in to see what these two warriors are going to do to each other this weekend and who will be next in line for a potential title shot at Tyron Woodley. Could RDA get another shot at a belt in a second weight class? Everyone will be tuned in to find out.