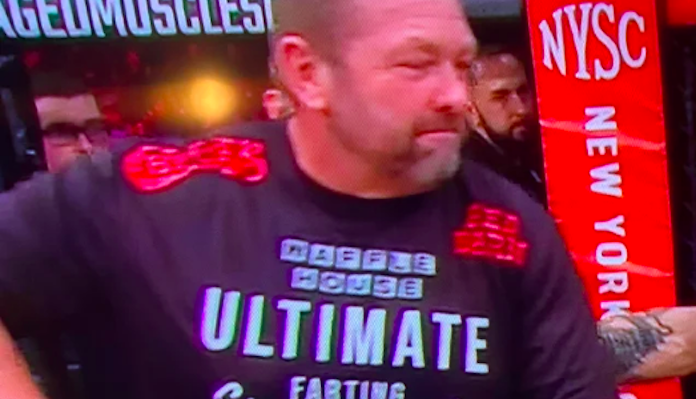 Last night, Lance Palmer became a two-time Professional Fighters League (PFL) champion, defeating Alex Gilpin by unanimous decision to win the featherweight belt. As usual, Palmer’s father Wayne was in the building to support, and he made a pretty interesting wardrobe choice for his night out.

The elder Palmer was visible several times on broadcast. Fans promptly noticed that he was wearing a slightly doctored UFC shirt. Instead of reading Ultimate Fighting Championship, it read Ultimate Farting Championship.

Why? Your guess is as good as ours, but it seems the Palmer patriarch is proud of his pungency.

Lance Palmer has gone undefeated across two PFL seasons, defeating Steven Siler to win the belt in 2018, and Gilpin to win it in 2019. He earned a million-dollar check on both occasions. His pro record currently stands at a solid 22-3-0—an indication that he’s easily one of the best featherweights outside the UFC. It’s not clear what his father’s farting record is, but it’s probably prolific.

What are your thoughts on this shirt choice from Wayne Palmer?