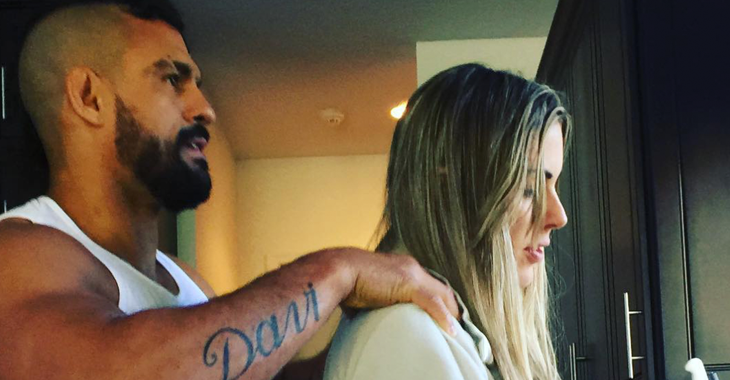 Although the scheduled fight between Vitor Belfort and Ronaldo “Jacare” Souza is not until May, a recent photo certainly suggests that Belfort may need to get back to a more strict training and nutritional program.

Belfort is seen in the photo with what appears to be a very large belly pushing his shirt out. This is not something we have seen typical of Belfort, letting himself get out of shape. It seems odd now especially with a fight that could get him right back for another shot at the UFC title.

Belfort is coming off a spectacular first round knockout over Dan Henderson back at UFC Fight Night 77 in November of last year. Prior to that, Belfort lost by TKO in a middleweight title fight against former champion Chris Weidman.

Belfort’s translator said immediately in the Octagon after finishing Henderson, “I want to say something to Brazil. This is a moment of change. Sometimes you fall down but you pick yourself back up.”

With a win against “Jacare,” Belfort could be easily put up once again for another shot at the title. Current middleweight champion Luke Rockhold definitely wants to avenge his KO loss to Belfort.

Rockhold recently said of his loss to Belfort, “All the weight came on my shoulders at that time, but it was the best thing that ever happened to me. If you look at how I carried myself after that fight and how much better I’ve gotten from that, I was a kid then and I matured so much more in and outside the cage. That fight was everything to me. I’m so thankful I got kicked in the head. Thank you (Belfort), thank you but I’m gonna fucking kill you.”

Will “Jacare” put a stop to Belfort and Rockhold rematch? Share your thoughts with us in the comments!