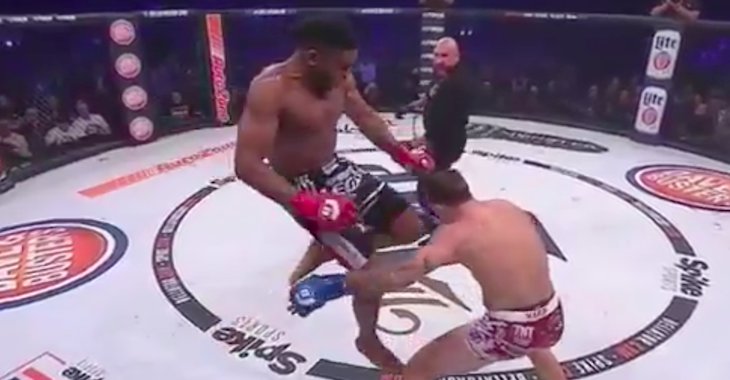 There’s a reason MMA is often referred to as “the hurt business”. Though they are certainly not what we hope for, our hectic sport frequently produces some truly nasty injuries.

The latest nasty cut to occur in mainstream MMA was dealt on Saturday night, in the co-main event of Bellator 170. This co-main event pitted British knockout artist Paul Daley with stone-fisted American wrestler “Irish” Brennan Ward. In advance of the fight, most fans believed there was a high likelihood of a brutal knockout, and they were not wrong.

Mid-way through the first round of the fight, Daley pushed Ward backward with a beautiful spinning back elbow, then removed his batteries completely by bludgeoning him with a rocket-fuelled flying knee. The knockout was so severe that Ward had to be stretchered out of the cage. Apparently, it also opened a seriously nasty gash on his brow. See this gash, which looks like it was dealt by a katana or bowie knife, below. Just be warned – this image is not for the faint of heart.

Post-fight, Daley explained that he had mixed emotions about beating Ward with such severity, as the he had become friends with his American adversary while doing Bellator promotional work. His words:

“Me and Brennan, we were hanging out a lot prior to this fight at all of the other events. His last victory, over Saad Awad [at Bellator 163], I sat ringside with girlfriend and his family and coaches, and I was celebrating with them. So it was a difficult situation for me at first to fight him.”

“To get a victory, it was kind of mixed emotions,” he continued. “The first two minutes I was running around like a headless chicken and going crazy. And then I look across, and I see his girlfriend, and she’s crying. It was hard. I just hope he’s OK.”

What did you think of Paul Daley’s crushing knockout of Brennan Ward? Sound off, PENN Nation!