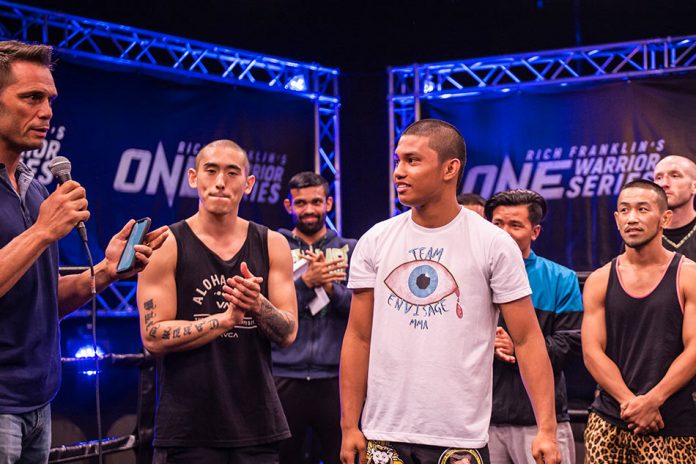 On Thursday, October 11 we saw Mark Fairtex Abelardo earn the $100,000 ONE Championship contract when he scored a TKO win over Shinechagtga Zoltsetseg at the ONE Warrior Series Season 3 show in Singapore.

The bantamweight had already put together a memorable performance in his first appearance on the ONE Warrior Series stage. Those two wins were enough to secure him a roster spot and the lucrative contract.

As we look ahead to what might be in store for Abelardo in his ONE Championship career, it’s a good time to look back on the three individuals who earned contracts during the ONE Warrior Series Season 1 campaign, and a few others who stood out but fell short of earning a deal. Where are Emmanuel Onyedikachi, Rockie Bactol, Woonkyum Kim, Nyrene Crowley, and Daesong Park now? 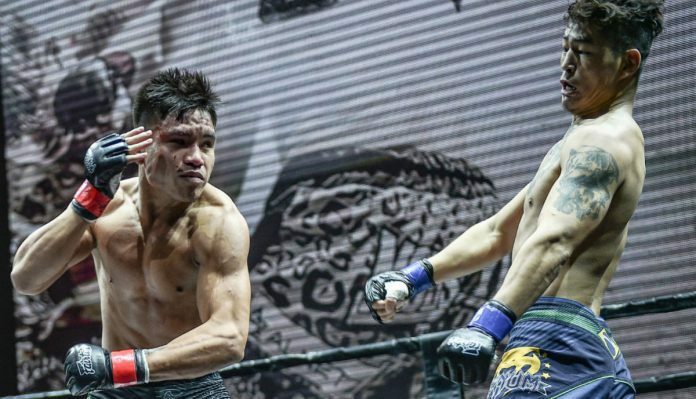 Prior to his first-round submission win over Mark Cuizon at ONE WARRIOR SERIES 1, Bactol had only two amateur mixed martial arts bouts to his credit, per Tapology. Since defeating Cuizon and earning the contract, Bactol hasn’t had another match. Bactol has kept a low profile on social media, and it’s quite possible he is being given an opportunity to develop before being thrown into the pool with far more experienced and skilled competitors on ONE Championship’s main roster. When he does make his first appearance, Bactol’s bout will be one of the most noteworthy on the card.

Woonkyum Kim who is also known as Kim Un Gyeom has been similarly inactive. He hasn’t had another bout since he scored a thrilling KO win over Muhammad Sanjidul Islam at ONE Warrior Series Season 1.

Kim’s win was just the first of his professional career, but it was clear Rich Franklin, CEO of ONE Warrior Series and others were impressed with what they saw from him. Kim has competed at both bantamweight and featherweight, so we don’t know which weight class he’ll be in once he makes his promotional debut. In fact, he may be a little further off that Bactol. Like his fellow Season 1 competitor, his debut will be worth watching.

Daesong Park has already had his first bout as a member of the ONE roster. At ONE: PURSUIT OF POWER in July, the South Korean lightweight won a unanimous decision over Trestle Tan on the event’s preliminary schedule.

On Season 1 of the ONE Warrior Series, Park defeated Kimihiro Ito in the first round of the main event scrap via TKO. Ito came into the bout with a 13-3 record, but his experience was no match for Park’s power and speed. Wasting no time, ONE scheduled Park for another bout and he proved he belonged with the win over Tan. He has a ways to go before he can consider himself a legitimate threat at lightweight, but his ONE Championship career is off to a fast start.

While he’s still yet to earn a contract, the powerful and explosive Emmanuel Onyedikachi has not only competed at all three of the ONE Warrior Series events, he’s won each of his matches. Back in Season 1, Onyedikachi defeated Nat Natchayangkul via unanimous decision in both martial artists’ professional debut. In Season 2, Onyedikachi scored a first-round TKO win over Sandeep Kumar Dahiya via leg kicks. Onyedikachi utilized excellent fight IQ as he repeatedly attacked his opponent’s weak area en route to the win.

Most recently, Onyedikachi scored another unanimous-decision win over Xiaoxiang Xie. Onyedikachi is now 3-0 as a professional and could be up to test his skills on a preliminary card. If nothing else, perhaps he could make a fourth appearance on ONE Warrior Series to see if he can finally grab one of those $100,000 contracts. Despite his imposing physique, he still has room for improvement to his overall game. He hasn’t really learned how to use his power effectively, but when he does, it could be trouble for his upcoming opponents.

Last, but not least is Nyrene Crowley. When it comes to the combination of power and aggressiveness, few fighters in her division can match what Crowley brings to the table. Her signature superwoman punches and strength in the clinch are real weapons. Crowley didn’t just win her debut at ONE Warrior Series 1.

She came back and won more convincingly in her second bout at ONE Warrior Series 2 when she secured the win with a second-round submission via rear-naked choke against Anita Karim. Crowley has made no secret about her pursuit of ONE Championship gold, and the role she believes ONE Warrior Series can play in the journey.

“My goal when I left New Zealand was to be a World Title holder within two years, so I am really working towards that,” Crowley said. “I would really love to hold a title in ONE Championship. ONE Warrior Series is a really great stepping stone to get me to ONE Championship, and then I can start looking at that atomweight championship.”

If she competes and wins at ONE Warrior Series 4, it’ll be hard to imagine she’ll go without a contract for the third straight event.