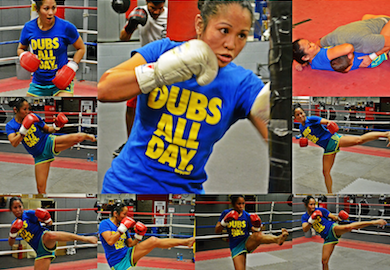 ONE Fighting Championship’s (ON FC) CEO Victor Cui said he won’t be surprised if Julaton, the former Women’s WBO Super Bantamweight champion, decides to test the waters, being a natural fighter.

Women’s MMA has been gaining popularity with rise of fighters such as UFC women’s champion Ronda Rousey.

ONE FC also has a stable of women fighters, which includes Ann “Athena” Osman of Malaysia, Sherilyn Lim of Singapore and the Philippines’ Jujeath Nagaowa.

“I talked to AJ (Ana Julaton) over the last two years. We follow each other on twitter, I’m a big fan of her and we know each other well. She’s been thinking about a career in mixed martial arts for a long time,” said Cui.

“The Hurricane” was touted as one of the “quickest” boxers ever to win a world title, having fought only eight professional bouts before clinching the WBO and IBA womens’ super bantamweight titles.

She lost the WBO crown in 2012 after being outpointed by Argentina’s Yesica Partricia Marcos.

Julaton has recently been seen training in MMA as shown by her Facebook pictures.

Cui said that if Julaton finally decides to compete in women’s MMA, ONE FC will welcome her with open arms.

“A natural home for her is ONE FC,” said the Filipino-Canadian executive. “If she’s ready and that I’ll say that if she does fight soon, we shouldn’t be surprised.”