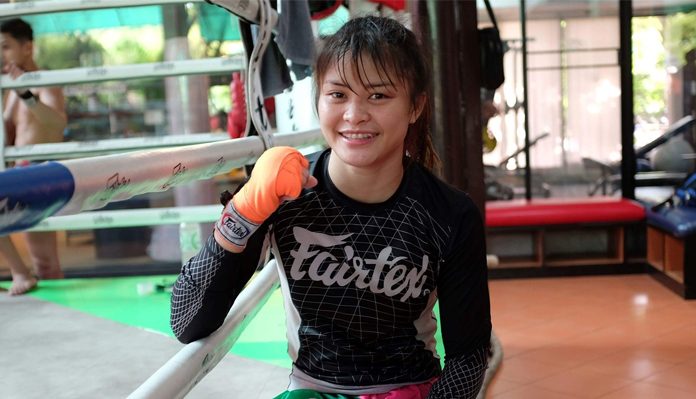 Two of the youngest athletes on the ONE roster will clash at ONE: LEGENDARY QUEST on 15 June in Shanghai.

21-year-old Stamp Fairtex is set to defend her ONE Atomweight Muay Thai World Title against the 18-year-old Alma Juniku, a WBC and IPCC Muay Thai World Champion. The match will be Juniku’s ONE debut and Stamp’s second bout of the year.

“Once a month would be ideal, but whenever ONE calls me, I’ll be ready. This will be my very first time going to China, and I’m really excited to travel somewhere new. I’ve only ever been to Singapore, and once to Japan. I like traveling and experiencing new things. I’m really grateful for the opportunities ONE has given me.”

Stamp is a ferocious competitor despite her youthful exuberance. The Thai warrior is one of the most determined athletes and has an excellent work ethic. But Stamp is aware her opponent possesses her own cabinet of unique gifts.

“She likes to put a lot of pressure on her opponents, and moves quickly. I think if I put the pressure on her, she might not be able to handle it as well. I will try to use her strengths against her. She’s got a lot of experience too, but I feel I’m still more experienced because I’ve fought since I was a child. It is a way of life for me and my family.” 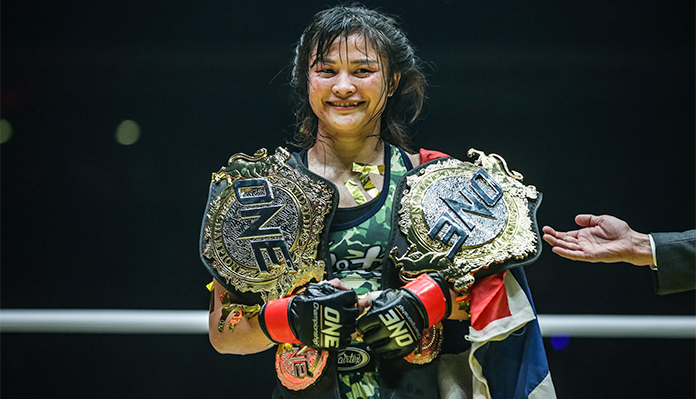 Power will be a key component in this bout, so Stamp’s game plan against Juniku is simple: “I plan to use my punches a lot, and kick her leg out to slow her down.”

The champion also believes the smaller gloves in Muay Thai give her an edge.

“Competing in the small gloves is an asset for me because my punches are really strong, so it helps add power and speed,” said Stamp.

“But, the same could be said for my opponent, so I have to be careful. I want to make this a really exciting match. I’m not scared of getting damaged, because I’m a fighter, and it is part of the game. I’m happy to compete in Muay Thai, it is my style, I just have to make sure not to be careless.”

More than who wins the bout, Stamp remains honored to compete and continue uplifting all the women in the world.

“I’m proud of what we can accomplish as women and proud for the opportunity to perform in front of the eyes of the entire world,” said Stamp, who also has her sights set on the mixed martial arts belt.

“I want to first be successful in defending my Muay Thai title, and then make my mixed martial arts debut later this year.”

Confidence isn’t an issue for either one, even though they express it differently. Juniku, the more outspoken competitor, doesn’t seem intimidated by Stamp by one bit.

“I can see this fight going toe-to-toe from round one to round five. I believe we’re just both going to go at it – I can’t predict how it’s going to end, but I know it’ll be a really good, tough fight!” said Juniku. “I’m training really hard. I’ve been working morning and night on my fitness and getting strong.” 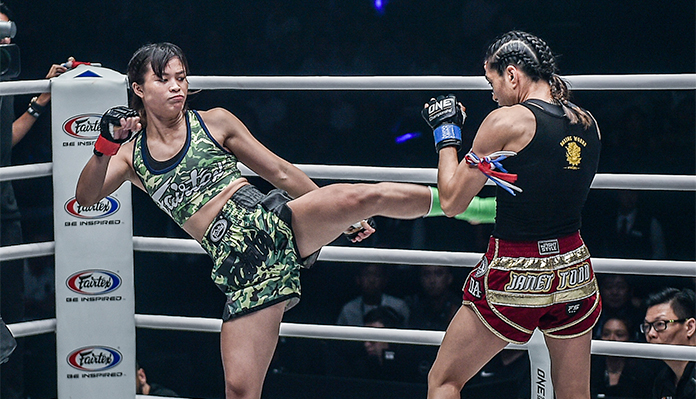 Unlike Stamp, Juniku wants to keep her strategy under wraps.

“My trainer and I are working on techniques. I’m not going to tell everyone [what we plan to do], but yeah, we’ve watched her,” Juniku said.

“All I can say is she’s aggressive with very good technique – typical Thai technique. The main thing I’ve got to look out for is that right hand and her clinch game, so I’m going to do a lot of head movement and stepping out of the way to counter.”

Juniku believes her preparation and hunger for the title could play a huge role in the bout against the reigning champion.

“When I jump in the ring, I’m really, really hungry,” said Juniku. “I want to win. I won’t let someone take anything away from me that is mine. At the end of the day, whoever’s the most hungry will get it. I’m strong and fast, and I get right to the point, so I land really clean.”

Juniku also stressed that she is looking for an emphatic win.

“My elbows and my hands are my biggest assets – I’m really strong with my hands, and I do a lot of damage with elbows,” Juniku said.

“I’d like to win by knockout, but Stamp is a really tough fighter who takes punches well, so we will have to see on the night.”

Stamp vs. Juniku. This bout has the potential to become an instant classic.