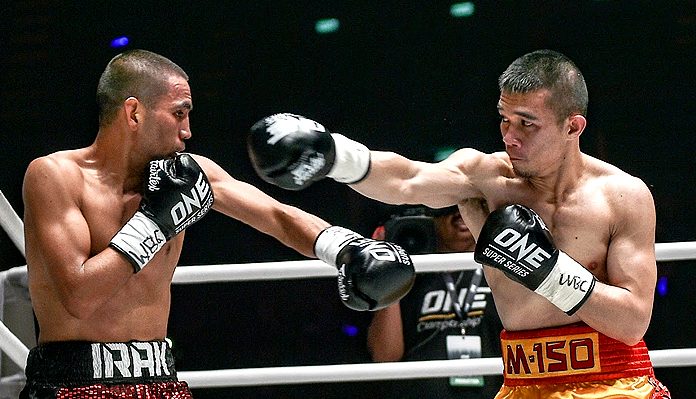 Srisaket Sor Rungvisai didn’t disappoint in his promotional debut and fourth defense of his WBC Super Flyweight title on Saturday night at the Impact Arena in Bangkok, Thailand.

Iran Diaz proved to be a game challenger, but Srisaket won almost every round on all three judges scorecards en-oute to a unanimous decision victory in his homeland. As you can see in some of the highlights below, Srisaket’s inability to stop Diaz wasn’t due to a lack of effort.

He pounded away at Diaz with powerful combinations to the head and body, but the rugged Mexican would consistently bounce back with just enough offense to keep Srisaket honest. Unfortunately for him, it wasn’t enough to win a significant number of rounds. Two judges scored the bout 119-109 and the other had it 120-108, all for Srisaket.

After the bout, members of the boxing media showered the champion with praise:

Had it 118-110 Srisaket. Diaz will get another fight of note after his performance.

It's remarkable how much of a fan base Srisaket Sor Rungvisai has built when you consider just under two years ago he fought in a six rounder in Thailand and was almost unknown.

Srisaket improved his record to 47-4-1 with the victory and his performance topped off a successful card.

Here is a look at some of the other notable highlights and social media reactions from ONE: KINGDOM OF HEROES.

Neither Stamp or Chuang was bashful as the the two women traded leather, knees, and kicks throughout this five-round affair. However, Stamp earned the unanimous decision win and the ONE Kickboxing Atomweight World Title with her work rate and aggression.

Stamp Fairtex was super dominant. I can say without a doubt, we have a new world champion.

Stamp’s style and sincere emotion after the win seemed to earn her some new fans. Perhaps they will be watching her perform as she looks to defend her title in her next outing.

Shinya Aoki Needed Less Than a Minute To Finish Ting

The Japanese legend added yet another memorable submission finish to his record on Saturday night when he choked out Ev Ting in just 57 seconds of the first round.

Ting went for the takedown as Aoki had a front headlock, and almost immediately, Aoki was looking for the finish. It was a spectacular maneuver, but not many were surprised at the execution.

Clearly, rumors of Aoki’s career coming to a close have been greatly exaggerated. He looks as dangerous as he ever has in his career.

There is no doubting the power of Gafurov. One overhand right landed flush on Issa’s face and the bout was over midway through the first round.

Gafurov hadn’t competed in almost a year, but he showed no ill effects of the long absence. Fans and members of the martial arts community responded to the emphatic KO:

Muin Gafurov knocks our Leandro Issa with an overhand right in round 1. Exact same shot Soo Chul Kim got him with.

That KO by Gafurov #KingdomOfHeroes

It was Aoki’s night, but he wasn’t the only Japanese martial artist shining in Bangkok. Suzuki wrapped up Robin Catalan in a rear-naked choke in the second round, and the latter simply couldn’t escape.

If it looked as if Suzuki was really confident on the mat, it’s because he’s done this sort of thing a time or two.

Hayato Suzuki is a fantastic grappler. That was his 9th submission win in MMA.#ONEchampionship #WeAreONE #KingdomOfHeroes pic.twitter.com/MT2KRQvkSs

If he can improve his striking he’ll be even more dangerous.

It was a great night for most of the Thai martial artists on the card. In keeping with that theme, Ishige used a powerful and effective top game to pound Antoniyar until the referee stopped the bout. The stoppage probably could have taken place about 10 seconds earlier.

Rika Ishige sends Bangkok into a frenzy with a ground-and-pound TKO of Bozhena Antoniyar at 2:48 of Round 1! #WeAreONE #KingdomOfHeroes #Bangkok #MartialArts pic.twitter.com/Uo8r18ZRen

Asia MMA and others took notice of Ishige’s dominance on the ground.

Rika Ishige gets back in the win column by dominating Bozhena Antoniyar on the ground, getting the referee stoppage in the first round.#ONEChampionship #KingdomOfHeroes pic.twitter.com/SdYSBX1HjY

Rika Ishige takes the back of Bozhena Antoniyar, flattens her out and pounds her into dust #ONEChampionship #KingdomOfHeroes

Rika Ishige wins by TKO (Ground and Pound) as soon as she got the take down she was in complete control.

Ishige is a handful if she can gain top position and Antoniyar had no clue how to work herself out of that predicament.

Most Explosive KO of the Night

There were a good number of finishes on Saturday, but Muay Thai artist Petchdam Kaiyanghadao’s stood out the most–even though it happened during the prelims. The left head kick and follow-up shots put Kenny Tse out on his feet before he tumbled to the canvas.

Petchdam Kaiyanghadao ends it QUICK with a devastating KO of Kenny Tse at 1:26 of Round 1! #WeAreONE #KingdomOfHeroes #Bangkok #MartialArts pic.twitter.com/1fm6xB5gMG

Kaiyanghadao is just 20 years old and needed just over a minute to end Tse’s evening early.

This latest victory followed up an explosive promotional debut three months ago. At such a young age, it’s only a matter of time before Kaiyanghadao becomes a major star–if he can continue to deliver these kinds of performances.

This will be ONE Championship’s final trip to Bangkok this year, but the city was left with some memorable moments.