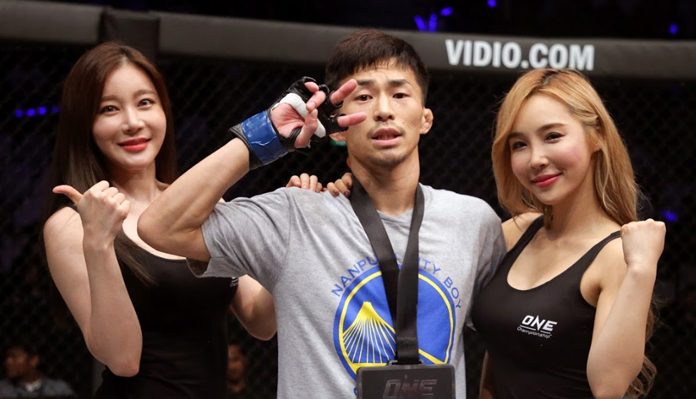 ONE: A NEW ERA will mark the beginning of what figures to be a long relationship between ONE Championship and Japan. The event will be the promotion’s first ever in the country, and it will feature several notable Japanese athletes in action.

Among them is Tatsumitsu Wada. He will face undefeated Brazilian newcomer Ivanildo Delfino in the quarter-final round of the highly-anticipated ONE Flyweight World Grand Prix.

Wada will have the opportunity to battle his way to the semifinals of the tournament while also performing in front of his countrymen, and alongside other Japanese martial artists in the famed Ryogoku Kokugikan arena. But in order to do that, he has to get past Delfino.

Let’s see how the two stack up.

On paper, this is an incredibly even matchup in a lot of areas, but experience level isn’t one of them.

Tatsumitsu Wada has 33 professional mixed martial arts bouts in his career compared to just eight for Delfino. Both men are around the same age with Delfino turning 29 years old on 14 March and Wada being 30.

Wada has been competing professionally as a mixed martial artist since 2008 when he was just 19 years old. His career got off to a rough start with five consecutive losses. However, he has bounced back since then. He has compiled a 20-6-2-1 record since the rough beginnings.

Delfino hit the ground running as a professional. He isn’t just a perfect 8-0, six of those wins have come by stoppage. It will be interesting to see if Wada’s advantage in experience is a factor.

Delfino is the hottest competitor coming into the ONE Flyweight World Grand Prix. He’s won all eight of his bouts and he’s been a stoppage machine. While he’s undefeated, he hasn’t yet proven he can manhandle top-tier talent. How he performs in this tournament and with ONE overall will determine how highly-regarded he is moving forward in his career.

Wada isn’t on a hot streak. He’s lost two of his last three matches. Thankfully for him, the two defeats came by decision, and he didn’t take much of a beating in the process.

The two men’s similarities continue when you look at their size.

Both stand 5’7″, which is relatively tall for the weight class. The arm length is similar, so neither man should have a decided edge physically.

If we’re looking at pure athleticism, that advantage belongs to Delfino. The Brazilian is slick and limber, and just a tad more explosive in his movements. That slight uptick could lead to positive results during striking and grappling exchanges.

The striking skills are also pretty close. While Delfino has done damage to opponents with head kicks, Wada has been the more effective boxer. Wada has also shined from top position when he’s been able to deliver damage with ground-and-pound strikes.

Wada is far from an amateur grappler, but he’s not on Delfino’s level. The Brazilian is a handful whenever a battle goes to the mat.

While it may be Wada’s preference to take most of his opponents down, he might rethink that approach against Delfino. The number of slick transitions and chokes at Delfino’s disposal are frightening. Delfino’s flexibility and training in Jiu-Jitsu are his best attributes, thus he gets the edge in that aspect of the sport.

Obviously, Delfino has never been defeated in his pro career, so there is little to go on when determining his durability. However, we know that Wada is as tough as nails. He’s been stopped due to strikes just once in his career, and it happened way back in 2008 in his second pro bout. Anyone who obtains a victory in this bout via stoppage will have earned it.

This might be an area where Tatsumitsu Wada has an advantage. Throughout his career, we’ve seen him go the distance against opponents in hard-fought matches.

Most recently, he battled Danny Kingad through three aggressive and active rounds. This will not be foreign territory for him.

Delfino has only been pushed three rounds twice in his career. He won those bouts, with one being a split decision, but he hasn’t shown cracks in his gas tank. Therefore we tentatively have to call this one even.

Tatsumitsu Wada is an experienced professional. He’s tough, well-rounded and athletic, but Delfino has the makings of a serious title contender. Were it not for Demetrious Johnson, experts might be taking a long look at Delfino as a potential overall winner. As it is, he has to be considered a sleeper pick.