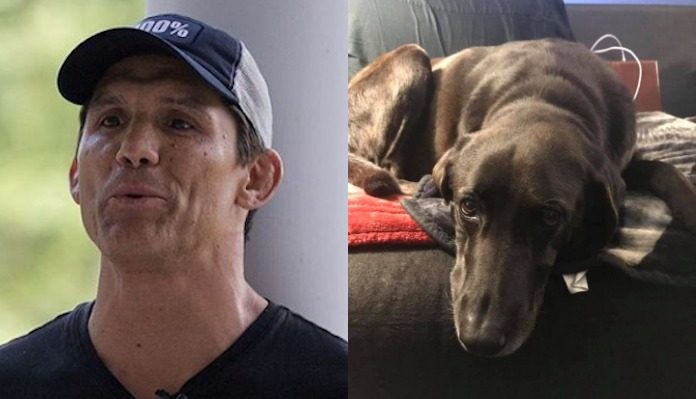 According to a report from WFAA-TV in Dallas, Texas, former UFC light heavyweight champion Frank Shamrock is being investigated for animal cruelty after tying up one of his mother’s dogs in the back of a pickup truck and abandoning it for five days. The report states the former UFC champ left the dog, named Zelda, at Dallas’ Love Field airport with a small supply of food and water, and then flew home to California.

Shamrock has actually owned up to this incident, explaining that he tried to find a home for the dog on Facebook. He decided to forsake the animal, which he says has a “goofy hip,” at the airport when he was unable to find a more suitable alternative.

“They can charge me with whatever. I will show up,” Shamrock told WFAA. “It is what it is. I’m not hiding in any way. It’s an unfortunate and terrible thing. I’m an animal lover and I ran away crying. … It’s an old dog – no one wants a 6 1/2, 7-year-old dog with a goofy hip.”

Frank Shamrock added that he believes Zelda ended up in favorable conditions as the result of his choice to abandon her at the airport.

“Here is what I guarantee: That dog is alive and safe right now, and I couldn’t guarantee that before I tied that dog to the truck and left,” he said.

Stay tuned for further updates on this Frank Shamrock situation, which is currently being investigated by local police, as details emerge.