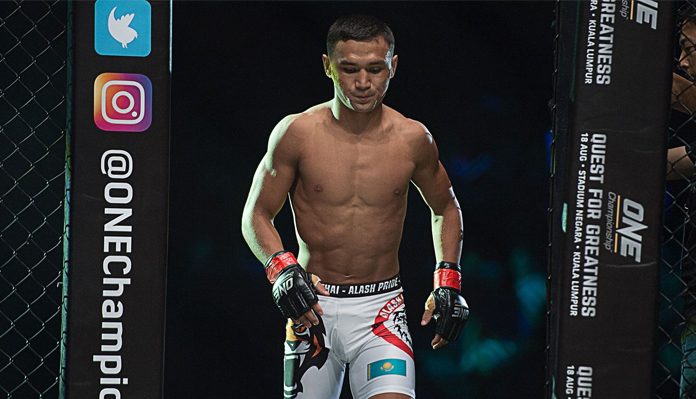 Before the main card gets started at ONE: A NEW ERA in Japan on 31 March, there are a host of interesting preliminary bouts, many of which are quarter-final matches in the ONE Flyweight World Grand Prix.

The winner of the tournament will get a title shot, so the stakes are high–even during the prelims.

One of the best of the quarter-final matches pits Kazahkstan’s Kairat Akhmetov against Australia’s Reece McLaren. The winner will move on to the semi-finals.

Here is a look at a breakdown of the two martial artists vying for a chance to compete for the ONE Flyweight World Title.

Kairat Akhmetov is four years older than McLaren at 31, and he’s had more professional mixed martial arts experience as well. Akhmetov has competed 24 times compared to 17 for McLaren. Both men have been in the cage with some of the best the sport has to offer.

Akhmetov is 22-2 in his career, and his two losses have come to current or former World Champions Geje Eustaquio and Adriano Moraes.

McLaren’s losses have been similar. Competing as high as the bantamweight division, McLaren suffered back-to-back losses to Kevin Belingon and Bibiano Fernandes in 2016 and 2017, but he has seemingly righted the ship.

Based on who the two men have faced, it doesn’t appear as though either man has much of an advantage when it comes to age and experience. Both are equally equipped to handle whatever the other throws at them.

When it comes to striking, both Kairat Akhmetov and Reece McLaren can be effective, but that effectiveness comes in different ways.

Akhmetov tends to lean toward throwing wide, winging power shots. He puts his all into most of the strikes he unleashes. I’d give him the overall edge in power. However, McLaren has quicker hands and feet albeit with less power.

As a matter of fact, he hasn’t scored a stoppage via TKO in five years. Despite the Aussie’s precision strikes, Akhmetov’s power poses more of a threat in the stand-up.

This is where things should get interesting. Both of these men want to grapple and ultimately lock in a submission. 10 of Akhmetov’s 22 wins have come by submission, and 7 of McLaren’s 12 are via tapout. Because of how evenly matched they are on the ground, it wouldn’t be surprising to see this fight turn into a pure strikers bout, if neither Akhmetov or McLaren believe they have an advantage.

If it does go to the ground, the two are very similar from a skill level standpoint, but Akhmetov brings a little more power. That’s especially the case when you take a look at some of his takedowns and slams. Once he lifts an opponent, they’re going for a ride.

On the flip side, McLaren is a Brazilian Jiu-Jitsu black belt and features some of the craftiest submission finishes in ONE Championship.

If he and McLaren clinch and Akhmetov can drop to gain a double leg takedown, it could change the identity of the match. McLaren has a chance on the ground, but he needs to be on top. If things begin to go poorly, it’ll be downhill.

Because of the way Kairat Akhmetov competes, you’d think he’d be the kind of competitor who might gas out later in bouts, but that hasn’t been the case. In fact, he’s won almost a third of his bouts by decision. That includes the last three.

His wrestling prowess and ability to maintain top control are the biggest reasons he’s capable of earning the nod from the judges.

Reece McLaren doesn’t usually have stamina issues, but his style and lack of power don’t produce many definitive rounds in his favor. Thus he finds himself in close bouts–unless he can get the submission.

Fatigue shouldn’t be a problem for either man, but that’s also where durability comes into play.

This is perhaps the easiest category to evaluate. Kairat Akhmetov has never been stopped as a professional. McLaren has lost via KO once at the hands of Belingon and he’s been submitted twice. When you also consider Akhmetov has had more pro matches, it’s easy to see him as the more durable competitor.

McLaren came back from his losses to Belingon and Fernandes on a mission and dropping down to flyweight, he’s won three in a row with two of the victories coming by way of stoppage heading into the Grand Prix.

Akhmetov has won all of his ONE Championship bouts via decision. That’s three in total. He hasn’t finished anyone since 2015. Based on that, McLaren is the one coming in with the most momentum.

On a whole, Akhmetov compares favorably in this matchup. He’s physically stronger, more capable of earning a stoppage on the feet, more experienced and durable. McLaren may be streaking, but he hasn’t been beating opponents on Akhmetov’s level. Both men would love nothing more than advancing in the tournament, but only one can move on. There’s a good chance that man is Kairat Akhmetov.