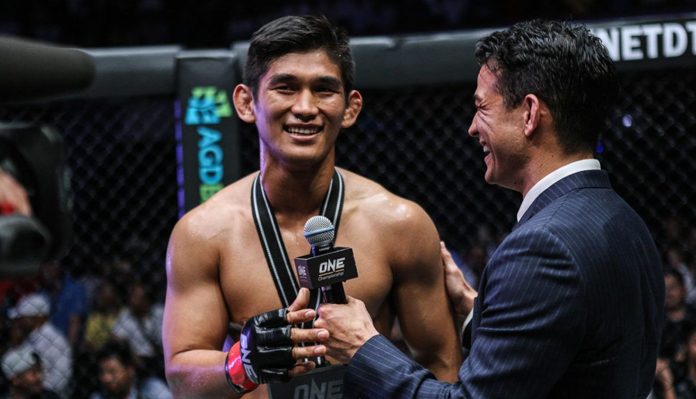 Few martial artists captivate an entire country the way Aung La N Sang does whenever he competes in his native Myanmar. The country and the arena comes alive when the ONE Middleweight and Light Heavyweight World Champion comes to the ring, and as we’ve seen, he’s been unbeatable in this environment.

At ONE: PURSUIT OF GREATNESS, Mohammad Karaki will be the latest to try and best Aung La in Myanmar. If he can emerge victoriously, he will be the new champion at 185 pounds. A total of six opponents have tried and failed to beat Aung La in The Land of the Golden Pagodas.

Aung La N Sang Vs. Mohammed Ali at ONE: UNION OF WARRIORS – March 2016

This was just Aung La’s second bout with ONE, but he was already in the main event. Completely unintimidated by the hulking physique and heavy strikes from Ali, Aung La calmly weathered an early storm of right hands from the Egyptian. Once the action moved to the fence, Aung La got an opportunity to work his strong clinch game.

After a momentary takedown, Ali was able to get to his feet, but he’d clearly lost some steam. Aung La seemed to sense his opponent had lost some fire. Ali would inexplicably shoot for another takedown and he fell right into the Burmese Python’s trap. Aung La locked on an airtight guillotine choke and seconds later Ali was forced to tap out.

The crowd in Myanmar at the Thuwanna Indoor Stadium went bananas, but little did they–or anyone else–know, this was just the beginning of Aung La’s ONE Championship dominance in Myanmar.

Aung La N Sang Vs. Michael Pasternak at ONE: STATE OF WARRIORS – October 2016

Pasternak was as tough as they come as he battled Aung La for three competitive and hard-fought rounds. Behind a steady diet of leg kicks, an educated counter right hand and impressive gas tank, Aung La did more damage and simply outlasted Pasternak. Aung La earned the unanimous-decision victory after closing out the third round in dominant fashion.

This match was memorable for a number of reasons. First and foremost, it was one heck of a scrap. Secondly, it was the last time Aung La would appear on a Myanmar card with ONE Championship in anything less than the main event. The win also set Aung La up for his first shot at ONE Championship gold.

After falling short in his first shot at Bigdash and the 185-pound crown at ONE: QUEST FOR POWER in January 2017 in Jakarta, Aung La would not be denied in Myanmar. In the rematch, Aung seemed energized by the partisan crowd, but this was still a tough match. Bigdash’s wrestling gave Aung La more trouble than any other weapon in an opponent’s arsenal.

However, it was Aung La’s striking and power combinations that convinced judges he should be the man to emerge as the winner and new champion. You could make the argument Bigdash deserved the win as Aung seemingly had no answer for his grappling, but the challenger clearly landed the more telling strikes.

The celebration that followed was one of the greatest spectacles in ONE Championship history.

Always a thickly built middleweight, Aung La entered the open-weight bout against one of the most feared strikers in the heavyweight division. Ngalani’s physique alone is enough to put a second thought in the mind of his opponents at heavyweight, let alone a natural middleweight. As usual, Aung La was undeterred.

Ngalani’s size and strength were a major factor early in the first round. He manhandled the smaller man securing an advantageous position against the fence and ultimately the top spot on the ground. Aung La maintained his sense of calm as the muscle mass of Ngalani began to work against him.

He tired and Aung La seized the opportunity. Aung La began to work his submission game and the attempts exhausted the rest of the stamina Ngalani had in reserve. With just under 30 seconds remaining in the very first round, Aung La locked in a guillotine choke that forced the quick tap from a gassed Ngalani.

The win over Ngalani, in true David and Goliath fashion, only raised Aung La’s legend in his country and across the martial arts universe.

Aung La N Sang Vs. Alexandre Machado at ONE: QUEST FOR GOLD – February 2018

One title was simply not enough for Aung La. With the light heavyweight title vacant, the Burmese Python set his sights on the 205-pound belt. What better place for Aung La to go looking for double gold than Myanmar?

Machado came into the bout with a solid resume. He’d won championships at heavyweight in other organizations and compiled an 88 percent finishing rate. The walkout would last longer than the bout.

A right head kick and a few follow-up punches caused a quick ending in the first round and Aung La had become a simultaneous champion in two different weight classes.

Aung La has put together a number of memorable finishes with ONE Championship, but all things considered, the fifth-round KO win over Ken Hasegawa might be his signature stoppage and victory.

Hasegawa was making his ONE Championship debut and he pushed the champion in a grueling bout. Early in the fight, the Japanese martial artist’s counterpunching was finding its mark. As usual, Aung La took the shots in stride and slowly but surely, his punches seemed to do more damage.

By the fifth and final round, Hasegawa’s face was showing the wear of such an intense battle. He was also exhausted and Aung La again would have the stamina advantage over his opponent. After stunning Hasegawa with a head kick and counter right hand, he landed a scintillating right uppercut that dropped the challenger to his knees. The referee immediately called a halt to the bout and Aung La was again the winner.

The victory was packed with the elements that Aung La N Sang has built his ONE career with: overcoming adversity, stamina, and a spectacular finish.

Can he add another memorable finish to his run in Myanmar? We’ll find out on 26 October.