Aung La N Sang has declared his intent to “give back” to his country of Myanmar, unveiling plans for a martial arts academy.

“That’s something I want to bring to Myanmar one day,” said Aung La, who was immortalized with a bronze statue at Kachin National Manau Park in his hometown of Myitkyina recently.

“I want to have kids’ classes where the little ones can train, learn martial arts, learn to defend themselves and be a better person.”

Aung La revealed that the academy is still in the “planning phase”, but the ONE Championship middleweight and light heavyweight king is determined to create something that will have the “greatest impact”.

He is also in the process of finding the right business partners to take the academy forward.

“The country that I was born in… I owe them a lot. My career is where it is at this point because of the support I’m getting from my people. It’s the one thing that I can always think about when I’m training that gives me inspiration and it makes me want to keep working hard. Without their support, I don’t know if I wouldn’t be here, but it would be a lot tougher.” 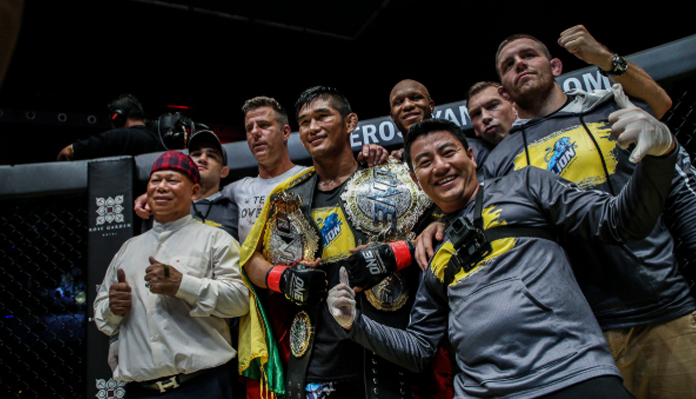 Aung La N Sang says the people of Myanmar are a continuing source of inspiration for him.

“It’s so easy for me to wake up in the morning knowing the support I’m getting,” he said.

“It’s got me fired up to get to training and get better. And for them to take me to this point in my career, I owe it to them. We don’t have anyone in my country that has done well in any sport, so for me to come back and do this for them and see kids grow into champions and be able to perform at the pinnacle of the sport would be amazing.”