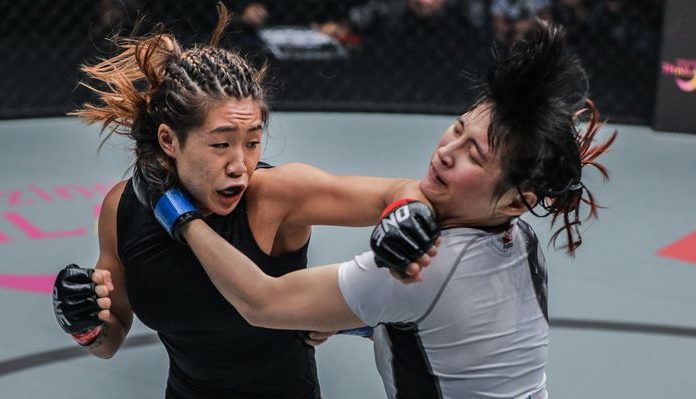 You could be forgiven for thinking that reigning ONE women’s atomweight champion Angela Lee may have some form of superpowers when you watch her in action in the cage. She is, after all, one of the most talented mixed martial artists in the world at just 22 years old.

As it turns out, the martial arts prodigy has had a lifelong love of the Marvel universe, which she’s shared with her brother and fellow ONE athlete, Christian Lee.

After growing up watching early morning cartoons, that love has now translated to the big screen. Lee has become an enthusiast for all of Marvel’s blockbuster films, especially Captain America: Civil War, Doctor Strange, and The Avengers.

So you can imagine how excited the Evolve MMA product was when, on a recent trip to New York City, she had the chance to participate in a special collaboration to put her martial arts skills to the test against the superhuman realm.

Lee worked with the stunt team on the set of Marvel’s Iron Fist to learn some of the spectacular moves used on the show.

“I had a blast learning the fight sequences for the TV series Iron Fist,” she told ONEfc.com.

“I worked with the stunt team, and it was so much fun. It is different from the regular fighting I am used to doing because it was choreographed, but it was so much fun. I had a great time. And, who knows? I would love to do something like that in the future if I had the opportunity.”

For Lee, there’s always time to sneak in a quick Marvel fix, no matter what the occasion. In fact, just days prior to her title defense against Jenny “Lady GoGo” Huang in March of 2017, she grabbed the chance to watch her favorite character in action in the film Logan.

“My family and I snuck out to one of the malls, and we watched the movie over there. It was really cool. I thought they did a really good job,” Lee says.

“[I enjoyed watching] the little girl, Laura. I thought she was so cool. She was scary and cute at the same time.”

For now, Lee’s focus has shifted to getting back to full health in order to her resume her quest to become a two-division ONE world champion — a goal that was delayed when she was forced out of her ONE: Heart of the Lion battle with strawweight champ Xiong Jing Nan.