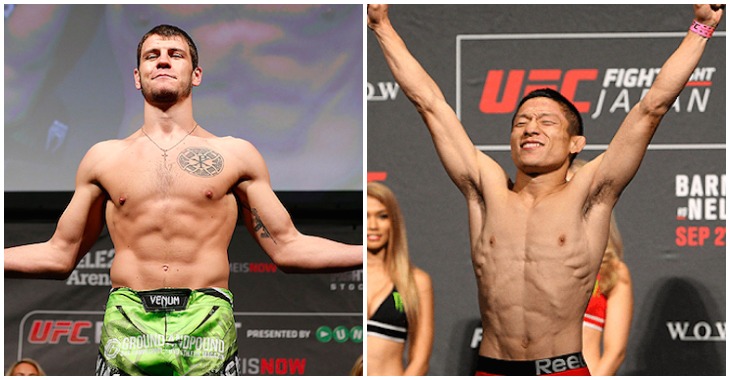 Over the last few weeks, the UFC has generated some controversy by removing a number of high profile fighters from its roster. The most high-profile fighters to part ways with the organization have been light heavyweight talents Ryan Bader and Misha Cirkunov, and welterweight star Lorenz Larkin. Other names to be scratched off the UFC roster include Valerie Letourneau, Ali Bagautinov, Rick Story, Takeya Mizugaki and Seohee Ham.

The first of these fighters was Ukrainian light heavyweight talent Nikita Krylov. Though Krylov lost his last fight, succumbing to a first-round submission dealt by Misha Cirkunov, his accolades are extremely impressive. The ranked light heavyweight finished all six of his Octagon wins – some by submission, others by KO – and has never seen the judges scorecards in any of his 26 professional bouts.

The next of the two fighters to be released over the weekend is Japanese star Kyoji Horiguchi, a Norifumi “Kid” Yamamoto protégé who was ranked in the flyweight division’s top-5. Horiguchi, who is loved for his crackling punching power and exciting fights, has lost just twice as a pro, once outside the UFC, and once to reigning flyweight king Demetrious “Mighty Mouse” Johnson, who tapped him at the last second of a five-round title fight.

Given that the light heavyweight and flyweight divisions are arguably the most talent-deprived weight classes in the UFC, the losses of Krylov and Horiguchi are undeniably disappointing. It is worth noting, however, that Krylov and Horiguchi both elected not to re-sign with the UFC, evidently unsatisfied with what they were being offered. It’s not like either man was kicked to the curb. They simply didn’t come to terms with the UFC when negotiating new contracts.

At the moment, it’s unknown where Krylov and Horiguchi will end up. Bellator MMA, however, is likely to be interested in adding Krylov to its ever-improving light heavyweight division, while Rizin Fighting Federation is apparently interested in picking up Horiguchi.

Do you think the UFC should have bumped Nikita Krylov and Kyoji Horiguchi’s pay to keep them around? Sound off, PENN Nation!