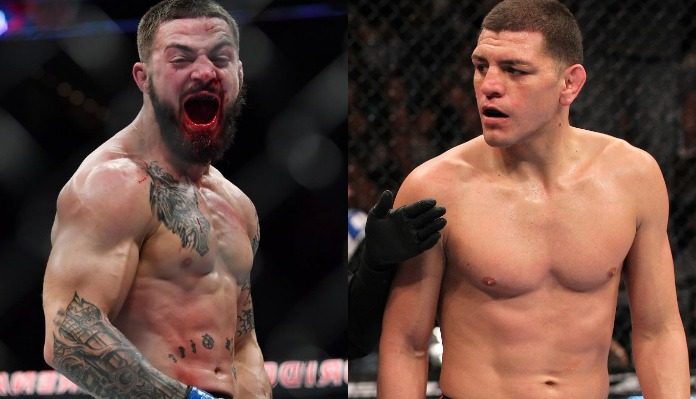 Yesterday afternoon, news surfaced that former Strikeforce welterweight champ and UFC welterweight title challenger Nick Diaz had accepted a one-year sanction after failing to appear for three mandated United States Anti-Doping Agency drug tests, a violation of the agency’s “UFC Whereabouts Policy”. This suspension is retroactive to April 19, 2017, which means that it will be over on April 19, 2018. After that date, Diaz will be free to begin competing in the UFC again, should he so choose.

USADA announced today that Nick Diaz, of Stockton, Calif., has accepted a one-year sanction for a violation of the UFC® Anti-Doping Policy resulting from three unsuccessful test attempts during a 12-month period,” a USADA release on the matter read.

As one of the game’s most exciting and popular fighters, it should come as no surprise that the callouts of the elder Diaz brother began almost immediately.

One of the first fighters to call out the Stockton-born fighter was always-entertaining UFC welterweight “Platinum” Mike Perry. Perry made his callout of Diaz on Twitter, offering to smoke weed with him all week ahead of time too.

“If [Nick Diaz] wants to fight I’d be down to welcome him back,” Perry said. “We can smoke weed all week together and I’d still put these hands on him.”

Who do you want to see Mike Perry fight next? Do you think he’d make a good welcome committee for a returning Nick Diaz?