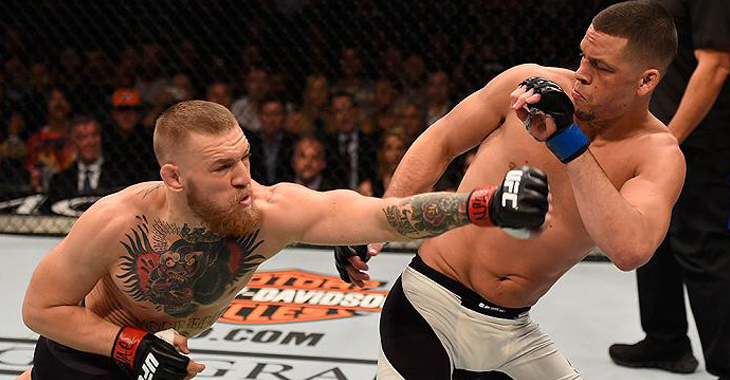 The two UFC stars create a pay-per-view recipe for success and for good reason as both men battled in an exciting five-round war where McGregor had his hand raised in a majority decision at the end of the contest.

Nate’s older brother, Nick Diaz believes that if he was allowed to corner Nate at UFC 202, he would have been able to help his brother solve any problems to get the win that night. “Just one inch, that’s the difference between how that fight could’ve gone,” Nick said while on Opie Radio (transcribed by Shaun Al-Shatti of MMA Fighting). “As far as I’m concerned, I definitely would’ve been that inch. … They just wanted to keep me out of there. They know that it would’ve definitely helped him out a lot.

However, an unpaid fine owed to the Nevada Athletic Commission blocked Nick from getting a license to corner his brother.

Nick went on to mention that Nate had Gilbert Melendez in his corner and that he has more a wrestling style, which is the opposite of Nate’s approach to fighting. Nick said that Melendez wasn’t necessarily giving Nate wrong advice but if he was working the corner, the instructions would have been more fitting to Nate’s fighting.

“I would’ve told him not to throw punches at that dude at all, because he’s going to sit there and watch you and try to counter everything,” Nick said. “So all you do is fake at him and flick at him and f*ck with him, and that’s how you do that. But he went out there and just, he just didn’t have it together in the first round, and I think I could’ve clicked him into the right mindset.

Do you think there would have been a different outcome if Nick Diaz was in Nate’s corner for UFC 202? Share your thoughts with us in the comment section.