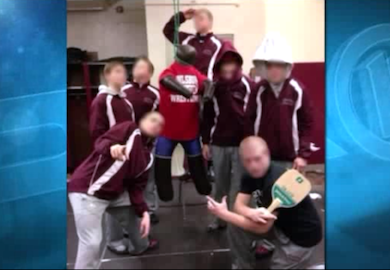 A disturbing, racist photo that appears to depict the wrestling team of a New Jersey high school has prompted a school investigation Tuesday.

The picture of the team is believed to have been taken by students at Phillipsburg High School. The photo depicts a black wrestling dummy hanging by its neck from the ceiling as the boys pose around it. The dummy is wearing a rival Paulsboro High School wrestling shirt.

Two of the students even went as far as putting their hoods up while extending the top into points.

School Superintendent George Chando would not comment on whether or not the picture was taken on school grounds.

In an email sent to the Warren Reporter, the paper that broke the story, Chando said:

“This is a student matter that is currently under investigation and upon conclusion of the investigation, the district will take those actions necessary and allowable with law and district policies.”

Phillipsburg’s wrestling team became state champions in Group 4 on Sunday, and the school will play host to District 1 teams for a tournament at the school on Saturday.

The investigation is ongoing.